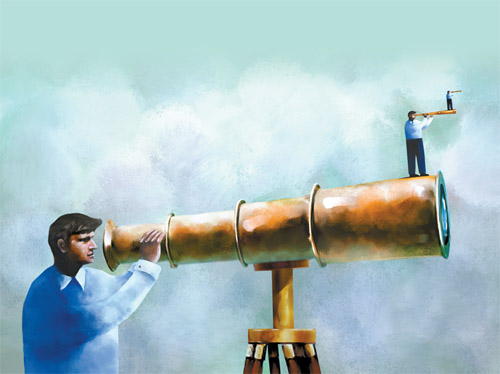 Whether you’re a public servant, carmaker or robotics engineer, crystal ball gazing is a serious business. Nowadays, it’s all about identifying future trends and needs that could make the difference between boom and bust.

For example, in May last year the grandiosely titled Presidential Council for Future and Vision was launched. Its aim: to explore different areas of society and create national agenda for the future.

Over at the artificial intelligence robot technology development center at the Korea Institute of Science and Technology, meanwhile, the boffins have a more specific goal.

Researchers are developing technology that could become part of mainstream society within a decade.

Even local carmakers are getting in on the action. At Hyundai and Kia Motors, the future trend research team and leading product planning team, both launched in 2003, study consumer behavior and changing living trends. 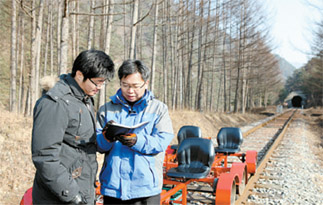 Jeongseon County officials Ji Geun-bae and Yun Jong-wook examine their notes in front of a rail bike trail that has become a main tourist attraction. Provided by Jeongseon County Office

This may sound abstract now, but these results will go into making the cars that will be whizzing about on our roads in seven or eight years’ time.

Experts at the two companies, who hold master’s degrees in fields ranging from psychology to sociology, are developing concept cars as they try to spot future trends that might influence buying trends.

The company likes to keep a low profile on the product planning team, which was modeled after similar organizations at competing foreign carmakers such as Ford and Toyota, so not much is known about the researchers and what they get up to.

“Back in the mid 90s, Japan’s Toyota and the U.S. carmaker Ford already had organizations like these making concept cars,” said an official of the planning team, asking not to be named.

“But because they kept them secret, we only found out later. Once we did, we tried to do the same.”

The first joint product put out by the teams was the HND-3 Veloster, a concept car that made its debut at the 2007 Seoul Motor Show. The focus of the research was to develop a car that would fit the needs of Generation Y consumers - people born between 1977 and 1994 - a demographic different from the baby boomer generation and Generation X.

The team conducted in-depth interviews with 73 Generation Y-ers in Los Angeles and New Jersey to find out exactly what consumers want when it comes to cars. 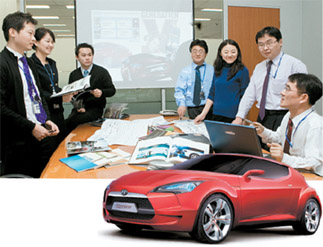 A research team at the Hyundai Kia Automotive Group. By Shin Dong-yeon

“Generation Y, which comprises about 73 million people, will need more than 4.37 million cars by 2010,” said Yang Jin-su, an official of the future trend research team.

“Our goal was to make a car that could compete with Honda’s Civic model, which targets young Americans.”

After a year of interviews and market research, the concept car was born in 2006.

While there’s nothing unusual in businesses investing in research about future trends, even provincial governments are looking at ways of boosting their income by focusing on tomorrow’s world.

Ji Geun-bae and Yun Jong-wook are the sole members of the county department charged with this task. The county head, Yu Chang-sik, has given them a lot of leeway, hoping they will strike gold.

The two researchers don’t have official office hours, and if needed, they travel abroad to benchmark other places. When they started out, the hardest part was that there was no precedent.

“I used to work in the taxation department and I knew a lot about taxes but I had no idea about how to find a future for Jeongseon,” said Ji.

“In the first two to three months, I was so concerned that I could only sleep for two or three hours per day.”

In the end, the pair concluded that reading a lot and seeing as much as possible was the best way to get started. 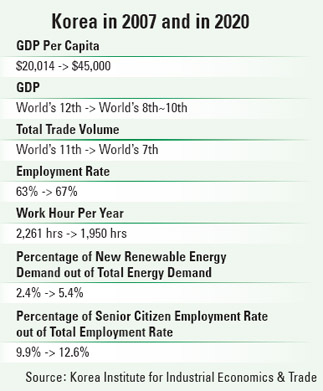 “Starting in August, I began reading about 15 books per month,” said Yun.

“I have read books on marketing, brand strategy, and tourism and discussed all of them with my boss [Mayor Yu].”

Both officials have done their fair share of legwork, believing that in order to develop a plan for the future they need to know every corner of the country.

They even hiked along the Dong River for twenty days, covering 400 kilometers (248.5 miles).

“After the fifth day I had blisters on my feet. I hadn’t walked so much since my military service,” said Ji.

For Jeongseon, once a booming mining town, it’s really about the future. At its peak 130,000 people lived here, but the population shrank to 40,000 after the mines closed.

There was a revival when Kangwon Land Casino opened, offering locals alternative employment to mining.

In 2005, county officials decided to convert a closed-down railroad section running from Auraji to Gujeol-ri into a rail bike trail. It was a hit with tourists. Last year alone, 310,000 visitors from Hong Kong, Japan and China came to explore the trail.

Thanks to new ideas like this, Jeon Jeong-hwan, the vice mayor of Jeongseon, predicts that the local economy will grow by 30 percent and the population will almost double to 70,000 over the next decade.

Experts like Choi Hang-seop, 39, of the Korea Information Society Development Institute, a government research institute, points out that interest in shaping the future and devising a fitting strategy is only a recent phenomenon.

“The government has devised economic development plans like the periodic five-year economic plans so government officials are only accustomed to short periods of time,” he said.

“They didn’t realize it was also important to look ten or twenty years beyond.”

He added that the recent boom was ignited by the quickly changing pace of society, which has made some of today’s technology obsolete in a relatively short time.

Choi said that a proper methodology on how to conduct research geared towards the future needs to be developed.

“Without methodology, predictions on the future are like astrology,” said Choi.

“In the past, Royal Dutch Shell predicted the oil shock and prepared properly, using it as an opportunity to go to the next level. We should also transform this crisis into an opportunity through research into the future.”