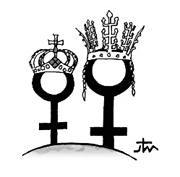 Catherine II, known as Catherine the Great, ousted the tsar, her husband, Peter III, in 1762 to reign as Empress of all the Russias for 34 years. Her lover, Duke Grigory Orlov did her dirty work and led the coup. Unfortunately for the duke, however, he didn’t last long as her favorite - Catherine is known to have had more than 10 lovers while on the throne. For their undivided devotion and commitment, her lovers received political and financial rewards in return. But Catherine didn’t hesitate to dispose of lovers who misused her affection or who threatened her sovereignty.

Elizabeth I, who reigned as Queen of England for 45 years in the 16th century, is famous for remaining celibate until death. Although her unmarried status inspired a cult of virginity around her, she was blamed for breaking many a knight’s heart with her insinuating love gestures and romantic letters. Blinded by love, many went to war and died in battle, crying “Long live the queen!” She was not averse to using foreign suitors for her own interests, making and breaking engagements with kings and princes of Spain, France and Sweden. Her ruthless disregard of the opposite sex earned her countless political victories as well as the epithet, “Virgin Queen.”

The annals of Hwarang from the Silla Dynasty record that the 27th ruler, Queen Seon-deok, had four husbands. Some suspect the authenticity of the records, but they say the queen married first as a princess. Her father, King Jin-pyeong, had her marry again after her first marriage produced no male heir. The second husband, Yong-soo, had been wedded to her sister, Chon-myeong and was the older brother of her first husband. Seon-deok remarried for a third and then a fourth time after her previous marriages all failed to produce a male heir. Ultimately, marriage for Seon-deok had served as an instrument to stabilize sovereignty.

These three powerful women would have had no emotional room to spare for love. Since childhood, they were trained to survive in the heartless and cruel world of the court. Even after they attained the crown of their ambition, they found themselves surrounded by male subjects. They had to be competent and ruthless, or otherwise would have had their future at risk. They chose to court men instead of being courted and consequently became conquerors in history. Accusations of Queen Seon-deok as tempestuous and Queen Elizabeth as duplicitous are mere annotations to their names.

KBS’s new epic drama, “Empress Cheon-chu” has become the talk of the town. History records the wife of King Gyeong-jong of the Goryeo Dynasty as a woman of questionable morals who violated the sanctity of wedlock. But in the TV drama, she has been reinvented as an icon of courage, passion and patriotism, depicted as a brave but reckless and emotional girl. In May, Queen Seon-deok will be the next to be reincarnated on the TV screen. If the dramas just depict the women as typical heroines of history, what kind of reaction would they receive from women viewers?