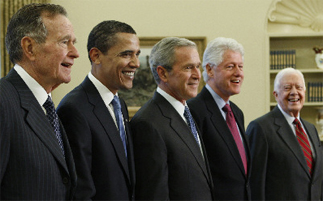 President George W. Bush poses with President-elect Barack Obama and the former presidents in the Oval Office on Jan. 7. AP

Former United States presidents Jimmy Carter, George H. W. Bush and Bill Clinton, incumbent President George W. Bush and President-elect Barack Obama gathered in the Oval Office at the White House recently. President Bush, who occupies the office for now, invited three of his predecessors and his successor who will take over the presidency a few days from now.

The Oval Office is a meaningful place for all of them. Here, President Carter contemplated the plight of the Americans taken hostage in the U.S. Embassy in Tehran, Iran in 1979. The elder Bush commanded Operation Desert Storm and expelled Iraq from Kuwait in 1991. President Clinton displayed outstanding leadership during prosperous economic times through the 1990s.

The five leaders had lunch together and posed for a picture in the Oval Office. President Bush told Mr. Obama, “Whether we’re Democrats or Republicans, we care deeply about this country,” and “we want you to succeed.” Facing a historic crisis, the five leaders displayed a united front to the U.S. public. The photograph is itself historic taken at a historic place. In Korea, such a photograph would not be possible. It would be hard enough just to bring all the former and current leaders together, let alone get them to smile for a photograph.

There are five former presidents still alive in Korea: Chun Doo-hwan, Roh Tae-woo, Kim Young-sam, Kim Dae-jung and Roh Moo-hyun - more than the U.S. However, there has never been an event where the former leaders came together to encourage the new president and comfort the citizens at a time of crisis. Unlike the U.S. presidents, they still harbor hatred or contempt against each other. One of them is still peddling his remaining power, attacking his successor and encouraging the opposition.

Chun Doo-hwan and Roh Tae-woo had been close friends once. When they were in the military, Chun had passed down a number of key positions to Roh. The two grabbed power together by staging the coup of Dec. 12, 1979. Later they both became president, first Chun and then Roh. However, in the twilight of their lives, Chun and Roh have not reconciled after parting ways. When Chun stepped down and had to go into exile at the Baekdam Temple, he felt terribly betrayed by his friend Roh. And the old feeling remains. However, they were allies as Kim Young-sam brought them to judgment. While Kim came into power thanks to Roh, he made a law condemning the Dec. 12 coup and sent both former presidents to jail. Chun and Roh held each other’s hand in court.

The hatred between Kim Young-sam and Kim Dae-jung runs even deeper than the animosity between Chun and Roh. While the two former generals once got along and handed over power, the two democratic fighters abandoned the faith of democratization in the face of power. In 1987, when citizens achieved democratization with blood and sweat, the two fought to be first to become president. Ultimately the power went to Roh, the successor to the military regime. The antipathy between Kim Young-sam and Kim Dae-jung crossed the point of no return. Kim Young-sam joined hands with Roh Tae-woo by merging with the ruling party, and Kim Dae-jung was pushed to the corner in Honnam. Between the two, there are countless life-long personal disagreements. Kim Young-sam would never forget his distrust of Kim Dae-jung. He still openly calls Kim a liar. Kim Dae-jung owns so many books that he even has his own library, and he and those in his closest circle look down on Kim Young-sam’s intellectual ability.

Roh Moo-hyun, meanwhile sits on the outside, ignored by the others altogether. Kim Young-sam was the one who handpicked lawyer Roh Moo-hyun in 1988 to become a lawmaker. Watching Roh Moo-hyun’s presidency, conservative Kim Young-sam must have regretted his decision. Kim thinks Roh is a half-hearted leftist. Other former presidents think Roh Moo-hyun did not know how to act like a president and had undermined the dignity of the presidential office. Kim Dae-jung might be pleased that Roh Moo-hyun succeeded with his Sunshine Policy. Yet, it is doubtful if Kim truly approves of Roh Moo-hyun.

The personalities of former leaders reflect the dignity of a country and its politics. In the political culture these former presidents created, we can find the violence of the National Assembly, and the defects of the ruling and opposition parties, whereas the five American presidents display the history and dignity of the United States.

When will our presidents be able to gather at the Blue House and smile for us?