Boxing bounces back into the ring with fresh round of events

Boxing bounces back into the ring with fresh round of events 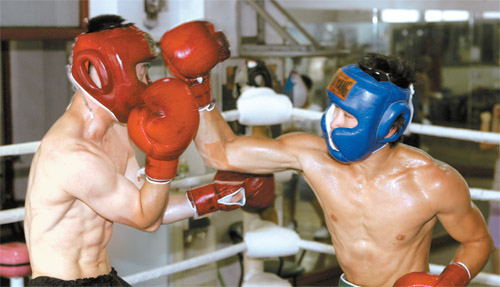 A world-class WBC world title match is promised for Jeju Island this November, Hwang Hyun-cheol of the Korean Boxing Commission announced last week. As much as the KBC would like to lure Ukrainian world heavyweight champion Wladimir Klitschko to Korea, world-class title bouts in lower weight classes are planned.

MBC ESPN is set to show the very best boxers in each weight class on its “World Cup Dynamic Boxing” show to be broadcast live on the last Monday of each month. Each tournament will be rerun throughout the month.

The 35th national newcomers’ tournament, the equivalent to the Golden Gloves Tournament in the U.S., is set to return in 2009. The tournament was canceled last year due to the death of Choi Yo-sam, the Korean boxer who died last year, and the lack of sponsorship.

Some significant changes will also take shape outside the ring. A new free agency system will allow boxers to seek a new contract after five years with possible extension of up to three more years if a boxer attains a Korean, intercontinental or world title. Also, the age limit for professional fighters has been extended to 37 from 35 but an extensive list of testing including CT and MRI scans will ensure the boxer is well suited for a bout in the ring. As for female boxers, mandatory extensive medical testing including pregnancy tests two weeks prior to a bout as well as the use of proper protectors will be enforced.