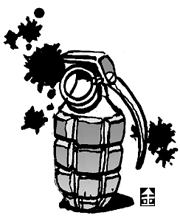 Cain is the first recorded human murderer. In the history of Judaism, Christianity and Islam, Cain and Abel were brothers who one day each offered a sacrifice to God. After God accepted Abel’s offering but refused Cain’s, he killed his brother Abel out of jealousy. Seeing the murder, God asked Cain, “Where is thy brother Abel?” Cain lied, answering, “I know not.” God grew angry with Cain for his sin, and sent him away as a fugitive, destined to wander the earth.

Murder is considered the worst sin among myriad crimes in the world. The more serious the sin, the more severe the punishment should be. However, the ancient Chinese philosopher, Mo Tzu, reflected that this is not always true. “The murder of one person is called ‘wicked’ and incurs one death penalty. Therefore, the murder of 10 people should be 10 times as wicked and deserves 10 death penalties. But when it comes to the great wickedness of attacking other states, people applaud it, calling it honorable.”

A common criticism leveled at war is that it is essentially “legitimate murder” in which several thousand lives or more are sacrificed.

At the outset of a new year, a war that is inflicting great harm on the global community adds more fuel to people’s criticism.

In particular, Israel, which is waging an all-out war against Hamas, the main Islamist movement in Palestine, attacked a United Nations school in Gaza that was sheltering hundreds of people displaced by Israel’s onslaught against Hamas militants.

Some have called Israel’s attacks “genocide.” In their defense, Israel’s military said its shelling was a response to mortar fire from within the school and said Hamas militants were using civilians as cover.

Historian Eric Hobsbawm pointed out in his book “The Era of Violence” that the ambiguity between militants and nonmilitants is a major characteristic of modern war.

The Treaty of The Hague, signed in 1720, stipulates that military operations should be conducted only between militants and that civilians should be protected against war’s harmful effects. However, the treaty has long been regarded as a mere scrap of paper.

Against this backdrop, civilian deaths reached more than 66 percent of the total death toll in World War II. It was merely 5 percent in the First World War. The death toll in Gaza since fighting began on Dec. 27 exceeded 784 on Friday, with women and children making up about 40 percent of the dead.

Although war is recognized as a legitimate justification for killing another person, it is limited to a war between armies. In this war [in Gaza], one side is using civilians as human shields, while the other regards civilians as a potential enemy.

This war can by no means be justified. Despite fierce criticism from many around the world, both sides do not seem poised to end the hostilities. It makes my heart hurt to see that they are unafraid of being branded as “Cain’s descendants.”