[TALK OF THE TOWN]Korea’s version of ‘Fame’ to hit TVs in 2010 as Park, Bae collaborate

[TALK OF THE TOWN]Korea’s version of ‘Fame’ to hit TVs in 2010 as Park, Bae collaborate 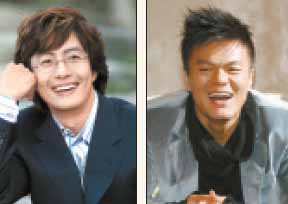 
Singer and producer Park Jin-young and hallyu star Bae Yong-joon, both 37, are collaborating on a new television drama, “Dream High.”

Park is in charge of music and choreography, and Bae will oversee the screenplay.

Dream High, which will air sometime in early 2010, depicts the life of teenage students who aspire to stardom, and their trials and tribulations as they learn to sing and dance.

The drama promises viewers a glimpse into the local entertainment industry.

The two companies are planning to hold casting auditions. Specific dates haven’t yet been announced.