[TV REVIEW]Dire talk show destroys a pledge to ‘be nice’

[TV REVIEW]Dire talk show destroys a pledge to ‘be nice’ 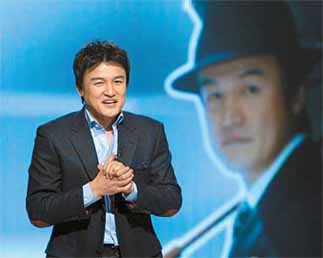 But the Korean TV scene has already ruined my strong (at least for a few days) will and made me evil again.

When the talk show debuted late last year, it seemed highly unlikely that I would spurn the show. It featured a group of pretty-faced actors who were making long-awaited TV appearances, such as Jang Dong-keon and Jung Woo-sung. Plus, the host, Park, is a seasoned actor himself, well noted for his glib tongue.

To be honest, it’s a crime for the show to have an audience rating under 50 percent.

I mean, how can you not attract viewers with eye candy such as Jung reading our love poems?

I have to confess that I replayed that segment a dozen - O.K., several dozens - of times. Yet, the show boasts an audience rating of a paltry 10 percent.

And then came last Sunday’s episode, which featured three politicians flapping around in an effort to soothe the waves of criticism against the show’s immature and, most of all, flat content.

I doubt, however, that the politicians appeared to try to rescue the show. On the contrary, they were more likely to sink it.

The invited politicians were the three floor leaders of the political parties that recently turned the National Assembly into a battlefield where hammers, fire extinguishers and rope prevailed as weapons.

The mere sight of the politicians smiling - how could they smile after wasting my and your tax money at the Assembly - was sickening enough.

And when they started to talk about the color of their underwear, the degree of my disappointment grew even bigger and eventually reached a state of utter incomprehension and awe.

The scene at issue came when the M.C., Park, asked Hong Joon-pyo, the Grand National Party’s floor leader, “So you are a fan of the color red. Is your underwear red, too?”

Well. This would be a good candidate for an entry into the Top 10 Most Hideous Questions of the Year award.

Why on earth should I care what color underwear a politician wears?

My ire accelerated when the floor leaders spent a good 20 minutes rationalizing the battle at the Assembly, blaming each other for the ridiculous scenes of battling lawmakers, footage of which was broadcast all over the world, to the embarrassment of our nation.

So, at this point, I felt the chances of me being nice this year about television programs quickly draining away.

When they started linking arms and singing, I had to breathe deep and pray to God for patience. My blood was curdling. If I could, I would have wired them cash to pay for a night in a karaoke joint, a more harmonious alternative to whacking each other on the head with hammers.

Then, incredibly, one of the floor leaders said, “Don’t get into that, because our dear people don’t want to hear that,” when asked how the fights at the Assembly got started.

Hello? Aren’t you the one who started the fight? And how do you presume to know what we want or don’t want to hear?

After enduring an hour of this rubbish, one thing become clear at least. I’m not likely to tune into this show unless it features pretty-faced actors. But I might hit the mute button and just enjoy the visuals. They might say something stupid and set me off again.

By the way, what kind of clothes and underwear will Barack Obama wear for his grand inauguration day?

Let’s hope he doesn’t tell us.