Warrior empress rules over TV ratings with an iron fist

Warrior empress rules over TV ratings with an iron fist

Elegant actresses rarely get the chance to play aggressive characters in a drama - for instance, as a war leader - so Chai Si-ra makes the most of her titular role in KBS 2TV’s history drama, “The Iron Empress.”

Chai plays Empress Cheon Chu, a general who fights against the Georan tribe of Manchuria to fulfill her dreams of reclaiming the lost land of the Goryeo Dynasty (918-1392), and her heroics have translated into a ratings bonanza.

Last Sunday, the drama, which started on Jan. 3, attracted 22.6 percent of viewers, according to TNS Media.

But it hasn’t been easy. Playing a battle-hardened military commander is hard work. 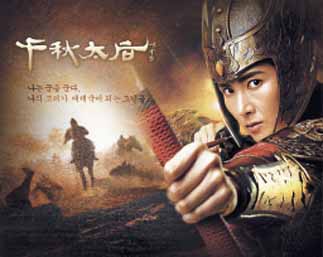 “I bet that of all the actors playing warriors [like Empress Cheon] I’ve probably spent the most time on horseback, sword in hand and shooting a bow and arrow,” Chai said at the drama’s outdoor set in Danyang, North Chungcheong.

Despite the challenging role, there wasn’t a glimpse of fatigue.

Chai’s choice of such a manly and aggressive role might surprise her fans. After all, she is a mother of two - she had her second child only last year - and playing the rough general warrior is exhausting.

But once she had the script in her hand, she knew the role was right for her.

“There are not that many Korean dramas that portray women as progressive like Empress Cheon Chu, a female war leader,” she said, admitting that the idea of wielding a sword and firing arrows was also part of the allure.

For authenticity’s sake, Chai underwent special training in combat and horseback riding to ensure that she looked the part when she went charging into a fray.

Despite every caution, though, accidents still happen. Last July, Chai fell off her horse and injured her hip bone. It took her eight weeks to recover.

“For the first time in my life, I experienced a blackout when I fell off the horse,” said Chai, recalling the incident.

Luckily for viewers, Chai is stout of heart and a hip fracture wasn’t going to keep her off the field of battle, even if she had to wear armor weighing 10 kilograms (22 pounds).

In the drama, Empress Cheon is portrayed as an unfortunate character destined to live an extraordinary life and responsible for protecting her people.

“Her personal sacrifices helped build a stronger country, and it’s true that the Empress was a successful leader, but as a mother and wife, she was ill-fated,” Chai said.

Shin Chang-seok, the drama’s producer, said the drama’s unique selling point was the role of the main character.

“The first two episodes of the drama may seem no different to other stereotyped history dramas picturing macho men as leaders, but the episodes of The Iron Empress don’t go down that same path,” Shin said.

The drama is not all blood and thunder, though. The Empress has a romance with Kim Chi-yang (Kim Seok-hun), a descendant of the Silla royal family, who seduces the Empress for the sake of territorial gain but then goes and falls in love with her.

The love/hate relationship ends only in catastrophe.

The Empress also dallies with Kangjo (Choi Jae-sung), her bodyguard who follows her around like a shadow.

Chai and Choi have worked together before. They starred in the legendary drama “Eyes of Dawn” in 1992. Viewers who are over 30 will no doubt relish watching the sparks fly once more between these two performers.

Chai’s role is also reminiscent of Lady Jami, a noblewoman from the Silla Dynasty 1,500 years ago, from the 2005 epic TV drama “The Emperor of the Sea.” Lady Jami, another female warrior, takes on Jangbogo, the King of Sea.

The difference between the two lies in the cause they fight for.

“While Lady Jami is obsessed with gaining wealth and honor, Empress Cheon Chu is focused more as a public figure who lives solely for her empire,” Chai said.