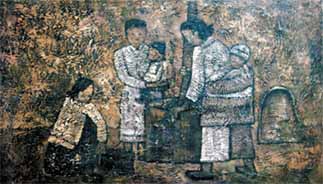 Another painting by Park Soo-keun is embroiled in a forgery scandal. The work in question is “Mothers Making Rice Cakes,” a painting that depicts three women pounding rice.

Late last month, Chung Joon, a local art dealer from Daejeon, donated the painting to Yonsei University Health System, an affiliated hospital of Yonsei University, saying it was worth 7 billion won ($5.18 million). Several days later, though, art expert Choi Myung-yoon from Myongji University was one of several critics to point out that an arts institute had cast doubt on the authenticity of the work when Chung submitted it for appraisal a few years ago. Choi said the painting donated to the hospital is fake, and he further asserts that it is less than a decade old.

Chung has retaliated, saying he never sent the painting for an appraisal.

Meanwhile, Yonsei has asked several art experts to take a look at the work in question. If no further doubts are raised, the painting will go on display as planned.