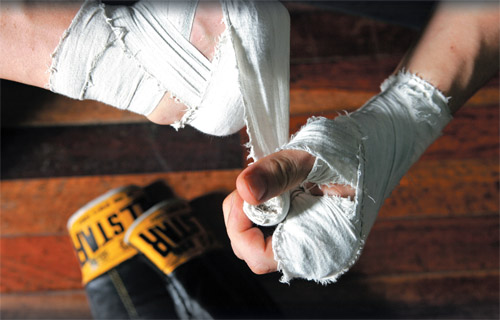 It’s hard to believe that a world champion once trained at the derelict Yeosu Boxing Gym. The slate roof is chipped, neglected since its owner Bang Ho-nam died in 2005, and the front lawn is overgrown with weeds.

The building’s state perfectly symbolizes the decline that the sport has endured over the years. Korean boxing has had to roll with the punches over the past six decades and the sport has been left on the mat for the past decade.

The days when boxers like Kim Ki-soo, winner of the WBA Junior Middleweight world title in 1966, trained here in this South Jeolla city seem like ancient history.

“Rather, the root of the current woes stems from too few incentives for those fighters to take the sport seriously enough to pursue it full-time,” said Hwang Hyun-cheol, the KBC’s general manager. “Currently, there’s a lack of money for the prizefighters and an accumulation of problems stems from it as a result.” 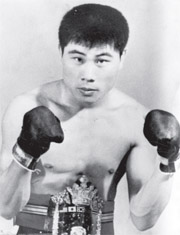 But all that could change if the Korean Boxing Commission and the local boxing community’s plans to revive what was once a national obsession take root.

At its peak during the 1960s through the early ’80s, boxing was a national sport in Korea. Fans packed neighborhood tea rooms and cafes to watch championship fights.

“The streets emptied when a major match was televised,” said Cho Min, secretary-general of the Korean Boxing Commission, since so few households owned TV sets back then.

Boxing also gave Koreans a sense of pride. Many foreigners used to have trouble locating Korea on a map, but boxing fans all over the world could name feisty fighters from Korea like Kim.

Born in 1939 in South Hamgyeong, North Korea, the prodigiously talented pugilist migrated to Yeosu during the Korean War (1950-1953). After winning the WBA Junior Middleweight world title 43 years ago, he turned boxing into a national obsession overnight.

“It was an economically tough time for everyone and boxing gave people hope,” said Cho. “Boxing was a sport for the poor and hungry. It showed that anyone willing to work hard could achieve fame and success in a short span of time. This was often not the case in other fields since Korea was still a developing country.”

The decline of the sport’s popularity was gradual and linked directly to economic development in Korea and changing attitudes and priorities. “When we used to train, we were focused and trained hard,” said Yuh Jae-doo, the owner of a boxing gym in southwest Seoul. “But kids these days lack motivation. I see many young boxers with great potential but they don’t have the desire.”

Parents also have different expectations these days. “I can’t be aggressive as a trainer anymore. If I tell a couple of the kids in my gym to spar and if one of them gets a shiner, it won’t sit well with the mother,” Yuh said.

But former boxers like Yuh, an orthodox fighter known for his devastating body blows during his heyday, look back on those days with affection.

“During the early stages of my amateur career, I had to work extra jobs and didn’t always have enough to eat, and therefore I would often tire easily in the ring,” said Yuh, a soft-spoken man with a hint of a South Jeolla regional accent.

“But when I was recruited to train with Kim Ki-soo and other talented boxers at the Golden Olympia Boxing Gym in Seoul, I was able to focus solely on boxing, and I produced some great results.”

Being good meant you could make money. Yuh was able to purchase - in cash - an apartment near the Han River after winning an Asian championship belt in 1971. “There was a certain charm in being able to make a living, something out of nothing, with my two bare fists,” he said. He later won the WBA Junior Middleweight world title in 1975.

Few in the boxing world believe the sport can recapture its past status in Korea, so the drive now is to create a platform for the future, and city officials in Yeosu are taking the lead.

Last week, they announced plans to restore the Yeosu Boxing Gym back to its original glory.

“We plan to renovate and fix the gym this year to its original state so that it can continue to provide a training space for aspiring boxers and also serve as an exhibition space for boxing memorabilia,” said Kim Eun-sook, a PR official with the city government. Kim Ki-soo’s family is involved in the project.

The PR official added that the city government has an eye on the tourism and global interest in the region following the 2012 Yeosu Expo.

The gym could well play a role in attracting more people to the city, Kim Eun-sook said.

Coincidentally, the KBC announced last week major new rules and regulations aimed at attracting better-quality athletes and, in turn, getting fans back ringside.

One of the changes is contractual. In the past, there was no limit to the length of a contract between a boxer and his manager, giving boxers little opportunity to control their careers. It was virtually impossible to switch management.

The new rule restricts the period of a contract to five years, allowing boxers to become free agents mid-career. However, if a boxer wins a national, intercontinental or world title during the initial contract period, the manager retains the right to manage the boxer for another three years.

But eight years is the maximum. That means that a boxer aged 18 can become a free agent with a major championship under his belt at the age of 26 and negotiate his own terms.

By all accounts, this is a dramatic change to the sport in Korea and, sport insiders hope, will have a long-lasting impact on drawing prime fighters.

In its announcement last week, the KBC also stressed the need for more regular health checks to protect boxers. Naturally, parents and younger boxers want to see the sport’s dangers mitigated as much as possible.

After all, it’s only been a year since Korean boxer Choi Yo-sam died on Jan. 3, 2008 after defending his WBO Intercontinental flyweight title against Indonesian Heri Amol.

In this same spirit, the rules governing what constitutes a knockout have been modified. A referee can stop a fight on a technical knockout if he deems one of the fighters to be unable to continue. Whereas this is already the practice in other countries, referees in Korea habitually allowed fighters to box on as long as they could get off the canvass before the 10 second time-out.

While the modified contracts and rules seem long overdue to outsiders, Hwang of the KBC said veterans of the sport might find it hard to stomach the changes.

“Most promoters and managers today have been around sport since the ’60s and ’70s. It isn’t easy to drop methods that have been in place since the early days. People don’t always easily accept new methods,” Hwang said.

The KBC’s primary aim is to reverse the decline in the sport before it’s too late. “Once you encounter hard times, it’s difficult to break away from that cycle. As the quality of fights goes down, fans lose interest, which in turn leads to less media coverage and a loss of sponsorship. We are working on reversing that trend starting with improved quality of boxing and increased payouts to fighters,” Hwang said.

Woo Dong-ju, a former Korean and intercontinental champ who has been operating a boxing gym for the past eight years, says fight money is the issue.

“The biggest change that needs to take place is the increase of payout for fighters,” he said.

To this end, the KBC in its announcement also said it will raise the minimum guaranteed prize money to 5 million won starting in December of this year. That might not seem much, Hwang said, but it’s a positive step forward to help a marketable boxer make a lot of money.

The KBC also plans to host more events where fighters can showcase their skills, including a WBC world title event in Jeju Island in November this year.

Whether these changes achieve the desired effect is unclear at the moment. Some say it’s too early to tell, but Jang Byeong-in, the manager of the Soongmin Boxing Gym in Seoul and a former Korean and intercontinental title holder, is optimistic.

“We’ve taken a big step in the right direction,” he said.

Perhaps it’s only natural to compare Korean to Japanese boxing due to the long-standing rivalry between the two nations and because of the resurgence in the popularity of the sport in Japan over the past decade.

“It’s difficult to admit but we are currently behind Japan,” Hwang said.

“Boxing went through a similar slump in Japan, but there’s been a renaissance over the past decade. Japan currently boasts four world champs and two imported champs. They went through a tough period similar to what we’re experiencing at the moment and made it work. I believe the current changes can serve as a foundation for a renaissance of boxing in Korea within the next 10 years,” he said.

Yuh is also confident about the future. He wants nothing more than to see boxing reach mainstream popularity again.

“The KBC, managers, promoters and boxers must work together in unity in order for that to happen,” the former champ said.