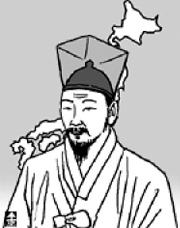 In the front yard of a historic library in Tsushima, Japan stands a large boulder with the inscription, “Relations of integrity and trust.” The monument memorializes teachings by the Japanese diplomat Hosyu Amenomori (1668-1755). Korea’s former president Roh Tae-woo was a fan of Amenomori. When Roh visited Japan in 1990, he praised the Japanese diplomat’s vision of good relations between Korea and Japan. Amenomori’s words sparked research and projects to commemorate him.

Jeong Yak-yong (1762-1836), who wrote under the pen name Dasan, came a generation after Amenomori. He studied Japan from a pragmatic viewpoint. His writings, titled “Studies on Japan” which appear in his book “Collected Works of Yeoyudang,” are the result of his thorough study. He read books that the diplomatic mission had brought in from Japan. Jeong discovered that Japan’s intellectuals were on a higher level, contrary to prejudices held by Joseon intellectuals.

“The Japanese used to get its books from Baekjae, the ancient Korean kingdom, and were believed to be quite ignorant. After that Japan started trade with Jiangsu and Zheijiang in China, and bought many good books there,” Jeong wrote.

“As Japan didn’t have any state examinations to employ government officials, scholars were able to devote themselves to study for purely academic purposes. Now, Japan has surpassed our country, which is very shameful for us.”

Nevertheless, Jeong made the conclusion that there was no need to fear Japan. He believed that if academic studies and culture developed, Japan’s appetite for invading other countries would disappear.

However, history shows that Jeong was wrong. He can’t avoid the criticism that he failed in his evaluation when just 70 years after his death, Japan invaded and destroyed Joseon, according to Park Seok-moo’s book on the scholar.

On Jan. 11, during dinner with Japanese Prime Minister Taro Aso, President Lee Myung-bak mentioned Jeong. The Korean president said that Jeong wanted to strip away prejudice and learn from Japan. His remark is correct if he meant to say that we should abandon our prejudices and learn what’s worth learning from Japan. But there is one thing to remember when mentioning Jeong: If we don’t make accurate assessments in international society, we will face future calamity.

When even a great scholar can make an error of judgment, today’s politicians, who don’t seem to be overly intellectual, must carefully heed this lesson.