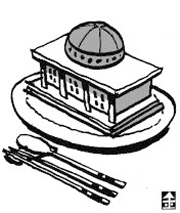 A Chinese appetizer favored by Koreans is called sam-pin-leng-chai, a salad that mixes fish such as shrimp or marinated jellyfish with spicy roast beef and vegetables. The sam (Chinese character for three) in the dish’s name refers to its three key ingredients.

The number three also appears when referring to politicians in Chinese. Here the three stands for three grades ?? top, average and substandard.

A Han Dynasty Confucian scholar, Liu Xiang, compiled a book called “Shoyuan (Garden of Stories),” in which this phrase appears: “There are three types of politicians. The wise moves the opponent, the hegemon enforces and the strong threatens.”

In Confucian teaching, the ideal politician is one who is wise, who embraces others without the use of physical power.

A politician who yields comes next in order of merit as he can resolve issues and build others’ self-confidence.

The least valued type of politician is the strong one. Bullying tactics and politicking often result in unreasonable governing.

Sensible politics feeds off society’s view of what is right and wrong. The yielding type of governance in a modern sense is based on laws and regulations. Forceful politics refers to authoritative governance that threatens society with harsh punishment for any wrongdoing.

The Confucian political ideals cannot be realized in today’s Korea as society lacks a reasoned, deliberative culture to ascertain right from wrong and then to accept the result.

The politics of yielding also does not apply on Korean soil as our society is without strong laws nor is it compliant with rules. So Korean politics must be determined by the strong, unforgiving and retaliatory, especially against wrongdoing.

But even if the reality is deep in the muddle, it is important not to let go of the noble ideal. It is the president’s responsibility to extend a hand and make room for dialogue and compromise in order to win over the opposing party.

The president was unwise to place the entire blame on the opposition party for the latest bout of brawling in a recent radio interview.

A true and sage leader looks to himself and his surroundings before blaming others.