Duo from hit film ‘Once’ performing in Korea

Duo from hit film ‘Once’ performing in Korea 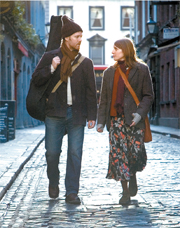 The Swell Season will be in town this weekend. Provided by the organizer

Most Koreans fell in love with musical films after seeing “Once,” a heart-on-the-sleeve indie movie set in Dublin about a pair of struggling musicians. Some 260,000 people watched the film in local theaters, and over 60,000 copies of its original soundtrack were sold across the country.

But what few know is why the music in Once was so beautiful. Glen Hansard, who played the guy in the movie, and Marketa Irglova, the girl, fell in love while shooting the movie.

In fact, the couple performed together before working on Once. Irishman Hansard has been the lead singer for the band The Frames since 1990. Irglova, a classically trained Czech singer and pianist, began performing with The Frames after her father introduced her to Hansard.

While they were touring the Czech Republic, a Czech film director suggested the film idea. This led to the 2006 album “The Swell Season,” which contains several of the well-known songs from Once, like “Falling Slowly,” “Lies,” and “Leave.”

Hansard and Irglova composed and performed all of the songs in Once. Falling Slowly, in particular, and the scene where the duo perform the song in a musical instrument store, was such a hit that the song won an Academy Award for Best Original Song last year.

“This is such a big deal not only for us, but also for other independent musicians and artists who are struggling. The fact that we’re standing here tonight is proof no matter how far out your dreams are, it’s possible,” Irglova said in her acceptance speech at the Academy Awards.

“This song was written from the perspective of hope. And hope, at the end of the day, connects us all no matter how different we are.”

Hansard’s band The Frames will also be in town performing with The Swell Season. The Frames are one of the few surviving bands on the Irish rock scene that enjoyed their heyday in the early 1990s. The band recently opened Bob Dylan’s 2007 Australia and New Zealand tour.