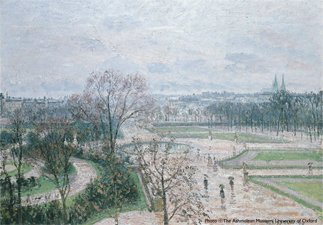 “The Tuileries Gardens on a Rainy Day,” oil on canvas, 1899 by Camille Pissarro. Provided by the organizer

He’s not the best known 19th-century French painter, in Korea at least. Monet, Renoir and Cezanne are much better known.

But Pissarro (1830-1903) has been called the “father of Impressionism,” according to The New York Times, because he monitored artists and profoundly influenced them.

Throughout the years, many Impressionist art exhibitions have been held in Korea but surprisingly, a new exhibition at the Goyang Aramnuri Arts Center, Gyeonggi, is the first to be focused solely on Pissarro. 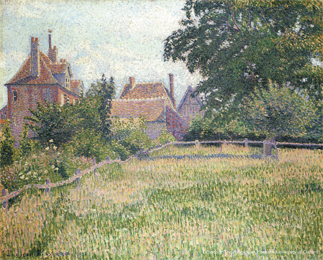 “The Deaf Woman’s House,” oil on canvas, 1888 by Lucien Pissarro. Provided by the organizer

As the title of the exhibition suggests, the exhibition is not just about Pissarro. On display will be work by his son, Lucien, and 18 other notable Impressionist painters.

The collection is widely considered one of the best of early Impressionism in the world.

“This exhibition is a rare opportunity for people to get a thorough understanding of Impressionism,” said Lee Ji-yoon of Aram’s PR department.

“Furthermore, the exhibition includes Pissarro and other Impressionists that have never been seen before in Korea,” Lee added.

Born in 1830, Pissarro produced many rural and urban landscape paintings.

“He also searched for new ways to improve his techniques and method of production through conceptualizing simplified copperplate prints,” said Lee.

The exhibition is divided into three sections: Impressionists, Landscape through Pissarro’s Eyes and Pissarro’s Family.

The first section contains landscape paintings from the 19th century. The second section displays Pissarro’s oil paintings, prints and drawings of rural landscapes. The third and last section shows paintings by Camille and his sons.

Notable Pissarro works that will be on display include “View from my Window, Eragny,” “Eragny-sur-Epte” and “Mme. Pissarro Sewing Beside a Window.”