In the depth of winter, a rainbow of orchids

In the depth of winter, a rainbow of orchids 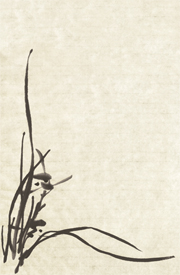 On the second floor of a building inside Yangjae flower market on a recent Thursday morning, a group of local wholesalers swarmed into an auction site and yelled out their bids.

“Four boxes of saimdang,” one of the men said.

Just two days earlier, the same orchid type was sold for 13,000 won, but as the Jan. 1 New Year fervor nears an end, the price of orchids, a gift exchanged between business associates, families and friends at this time of year, gets a lot cheaper. 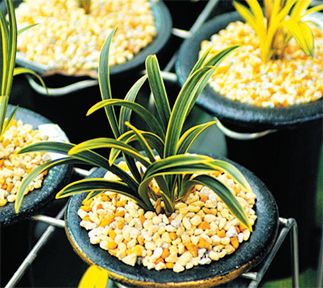 An extremely rare type of orchid worth 200 million won from Jeju Island, off the southern coast of Korea. [JoongAng Ilbo]

At this time of year, it’s almost impossible not to spot deliverymen hopping in and out of office buildings to drop off orchids as gifts for people who got promoted or were assigned new positions in their workplace.

The tradition of giving orchids dates way back.

If plum, chrysanthemum and bamboo were the great loves of the literati and artists during the Joseon Dynasty (1392-1910), orchids were embraced 2,500 years ago by Confucians.

For generations, orchids have stood as a sign of integrity and the uncompromising spirit of the scholar, and, given the influence of Confucian thought over Korean culture, it’s no surprise that this country has a particular fondness for this flower plant.

An interesting illustration of this is hwatoo, a Korean card game, which arrived here under the Japanese colonial regime (1910-1945). Koreans refer to one of the plants pictured on the cars as a May Orchid, but if you look carefully, the flowers and leaves are different from orchids. Instead they are ayame, a type of iris that grows during the rainy season in Japan. An iris has a significant role in traditional Korean culture, such as on Dano, the fifth day of the fifth month in the lunar calendar, when it was used in various rites and ceremonies. But when it comes to playing cards, Koreans call the plant orchid instead.

The Yangjae flower market in southern Seoul is the nation’s largest wholesaler. More than 1,000 farms nationwide send representatives to the auctions every Monday and Thursday at 8 a.m.

On average, the market sees a daily turnover of around 200 million won ($147,800), but near year-end and from February through March when parents and students present orchids to teachers before the new academic year, daily sales climb to 500 million won.

“Owners of most orchid plantations are busiest when Korean companies and major government bodies reshuffle their personnel,” says Yeo Dong-gyu, a 39-year old representative of Seonhwa Farm, adding that dates for various corporate affairs are critical information for orchid merchants. “That’s when owners put their plants out for sale.”

The flower auction is ground zero for finding out what sells and what doesn’t in Korea in the orchid department.

“Nowadays, items that are cheap and take up less space sell the best,” says Mun Yong-seok, 42, an owner of Twin Orchid in southern Seoul.

An orchid sells for between 50,000 won to 80,000 won on average in local flower shops. Normally, Asian orchids have about six to seven leaves. The Western orchid has less leaves and comes in smaller pots.

Because of the declining economy, not many people can afford heran, a high-priced orchid with yellow tints on its leaves. This species sells for 100,000 won to 150,000 won here.

If the leaves are more ornamental, the price can rise to 300,000 won. Others from China, which also bloom at this time of the season, are popular among local consumers for their subtle fragrance.

Western-style orchids are particularly known for the outlandish shape of the flowers. They live longer compared to Asian orchids, which bloom and die in three weeks.

Some live up to six months with regular watering once a week, and the yellow flowers that you see on Chinese cymbidium, or boat orchids, which are increasingly popular here, can live for several weeks.

“Chinese people think of yellow as money, red as wealth and green as physical well-being,” says an official at the Korea Agro-Fisheries Trade Corporation, which runs the market at Yangjae. “Korea imports 10 billion won worth of cymbidium from China annually.”

To get an orchid to live a long time isn’t that difficult, according to the experts. Orchid flowers in full bloom last about three months if they are taken care of properly.

“There is no secret to it,” says No Jae-hyun, a professor of urban landscape architecture at Woosuk University. “You just need love and research to raise the plant well.”

No says that the right soil is easily available and as long as you expose the plant to the appropriate amount of light, water, temperature and humidity, it should thrive.

But why is it that orchids seem to die so quickly after they have been handed out as gifts? Many experts explain that an office in winter is the worst place to keep orchids. There is usually inadequate ventilation and heating, and the air is often too dry and too hot.

Although orchids are exchanged during the New Year period at the end of December and start of January, the busiest time is March.

At this time of year, there are up to 120 orchid exhibitions all over the country and many competitions, which allow locals the chance to indulge themselves in the exquisiteness of the plant.

To pick the best orchid, you have to pay attention to the shape and colors of the leaves. For instance, the pigment is always better if the leaves are strong and thick. But meeting these conditions doesn’t always guarantee an award.

Winning orchids and their prices are intricately related. The price depends on the score the plant gets in a competition, and the price could influence the result of the competition. But in the end it’s the aesthetic value that counts the most.

Although orchids are popular throughout Asia, there are subtle differences according to taste in each country.

Experts say Koreans pay more attention to the flow of the overall look of the plant, the Japanese focus on color and the Chinese care for shape.

Interestingly, orchids are one of the rare few plants that have flowers and leaves. While orchid flowers are far from being fancy or rich, they give off a graceful fragrance. That’s why many writers in the past kept orchids in their studies.

Scholars used to use orchids as a metaphor for friendship and integrity. Scholars during the Joseon Dynasty used to breathe in the fragrance of the orchids for clues about the owner’s honesty and trustworthiness.

The tradition of giving orchids as a gift has kept on, though not as bribes. In fact, more orchids are available nowadays than ever before. Scientists and farms are adept at genetically engineering the plants in mass quantity, which in turn lowers the prices.

But some worry that the trend for orchid-giving has become too commercial. Some scholars point out that the innocent spirit of the plant is long gone because the plants are so widely available.

Also, perhaps it’s necessary for people to reconsider the meaning of giving an orchid to people who are assigned to new work. In a country where corporate culture is increasingly rough and corrupt, perhaps it’s time to learn from the spirit of orchids.

So if you want to give someone an orchid as a gift, don’t just send off the flower. Write a poem and send that, too, recapturing the spirit of aesthetic beauty that has evolved over time around this beautiful plant.