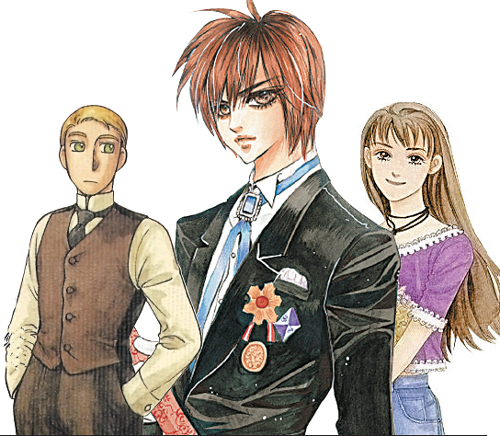 Sometimes we choose to get deceived. Or rather, we want to be deceived. We choose to believe Santa Claus climbs down chimneys and deposits gifts under the tree on Christmas Eve. Against our better judgment, perhaps, we trust lovers who whisper they will love us and us only forever.

And it seems the story of a gallant young prince galloping through the forest on a white steed to rescue a poor waif from the misery of her life is a myth teenage girls in Korea are particularly fond of.

Classics like “Hana Yori Dango (Boys Over Flowers)”, a popular Japanese comic by Yoko Kamio, and “Gung (Princess Hours)”, a comic for teenage girls by Park So-Hee, are a big hit here.

This follows the success of the KBS dramatization of Boys Over Flowers that began last week, said Lee Ju-yeon, a manager at Bucheon Cartoon Information Center, a library for cartoons that opened in 1998 in Bucheon, Gyeonggi. 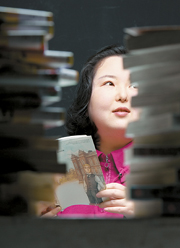 Boys over Flowers first came out in 1992 in a Japanese biweekly magazine called Margaret. Since then it’s been remade into a drama and a film in Japan, and the Taiwanese made their own TV drama using the story.

Cinderella stories were hugely popular in the 1990s, but they gave way to a range of other dynamic genres like horror, action and fantasy in the early 2000s.

The story of Boys Over Flowers is simple enough. A dashing young heir to a family fortune falls in love with a working-class girl called Jane. He whisks her off to his luxurious mansion and lavishes her with millions of won worth of accessories and jewelry.

Most of us are old enough to know this kind of rags-to-riches tale never really happens outside of fiction.

Yet as we read or watch these stories unfold before us, it’s hard not to be swept up in the drama. And it’s not just teenagers anymore. “Adults also ask for Boys over Flowers and Princess Hours,” Lee said.

Seo Mun-suk is one such adult who admits to being a fan of Cinderella-type tales. She’s a loyal member of an online comic lovers’ community called “Comic, My Love,” and her eyes sparkle when she talks about the love of her life.

“I know it’s unrealistic, but that’s exactly why I read these kinds of stories. It’s all fantasy, I know, but it’s fantasy that comes to life on the screen or the page,” Seo said.

Seo has been infatuated with comics and the Cinderella plot for almost 20 years now. When she was 12, she read “Candy Candy,” a Japanese cartoon series by Kyoko Mizuki and Yumiko Igarashi.

Since then, she’s plowed through almost every Cinderella comic she can get her hands on. But her favorite remains Candy Candy.

“I like [the series] because a bunch of handsome guys really love Candy, who’s always positive but not that pretty.”

These days, Seo is hooked on “Emma,” a romance comic by Kaoru Mori. Set in Victorian London, the story is about a maid who falls in love with a member of the gentry.

“My friends tell me I should quit reading these outlandish romances, but looking around, life isn’t all fun and games. It’s so routine and plain. Is it wrong to want to escape reality for a short time by reading comics?”

Seo has a 500-volume collection of Cinderella-style comics at home. She handles them with care so that they don’t discolor, get wet or tear. She dreams of one day becoming a mother and a grandmother and reading them to her daughter and granddaughter.

“I used to get butterflies in my stomach when I read these comics as a kid. Now they are my source of energy,” Seo said.

According to Park In-ha, a comic critic and a professor at Chungkang College of Cultural Industries, Cinderella stories tend to attract more readers during tough economic times.

“It’s a way to escape the frustration of seeing our nation’s lawmakers brawling like gangsters and witnessing your portfolio of stocks, equity funds and other investments shrink in value,” he said.

Park said indulging yourself in this kind of fantasy is a healthy way of relieving stress especially because women can easily relate to the stories.

“In that sense, many of us women can easily relate to them.”

Lee adds that today’s Cinderella stories stress the importance of acquired qualities instead of innate characteristics, which offers hope to people who don’t have the advantages that others in society enjoy.

In other words, you can’t change your looks and background, not to any great degree, but you can work on your personality and your perspective on life, Lee adds.

“As long the Cinderella-style comics are read by people with their feet still rooted in reality, they can be an eternal battery charger for women’s dreams for romance,” Lee said.

Some of Lee’s works include “Green,” “Milky Boy” and “Do You Know How I Feel.”

The “happily-ever after” aspect may be nonsense in reality, but it is an antidote to feelings of hopelessness and depression.

Economic forecasts may be gloomy and your future may be full of question marks. But remember, you can be anything in a comic.

And, you never know, the glass slipper might fit you perfectly, just as it did for Cinderella.