Facing up to masks

Facing up to masks 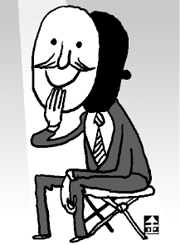 A “persona” can sometimes refer to an actor or actress who appears in several films produced by a specific director and is good at expressing the director’s inner thoughts.

Along the lines of such greats as director Tim Burton and actor Johnny Depp, Martin Scorsese and Robert De Niro, Wong Kar Wai and Tony Leung come the notable director/actor partnerships of Jang Jin and Jung Jae-young, and Lee Jun-ik and Jung Jin-young.

The term “persona” is derived from the Latin word for the mask worn by actors in classical times. However, as time passed, its primary meaning was broadened to accommodate “personality.” The term “person” meaning an individual or a human, originated from the word persona.

Carl Gustav Jung, the father of analytical psychology, said that the domain of human awareness consists of ego as the basis of identity, and persona as the mask one portrays to the world. For example, the cruel gangster in the 2008 film “Kang Cheol-jung: Public Enemy 1-1” is a calm, homely person. The social psychologist and philosopher Erich Fromm pointed out in his book “To Have or to Be,” that “the meeting of external personas is closer to ‘to have,’ rather than ‘to be.’”

Persona has been transformed in a variety of forms in literature. In the novel “The Dream of a Mask” written by Lee Chung-joon, a young elite judge who graduated from a prestigious university has a peculiar habit of going out at night wearing a mask and a mustache. He relieves his fatigue and nerves strung out by pretentious relationships in society. He murmurs, “People are striving to make their own masks stronger.”

Recently, the term “multi-persona” has become a buzzword on everyone’s lips. According to the Hyundai Research Institute, “multi-persona consumption” was one of the top consumption trends for 2009. It predicted that consumers will show the characteristics of multiple consumption behavior, such as preferring cheap products amid deepening economic recession, but buying luxury goods to compensate.

The concept of a multi-persona was discussed as a major agenda item at the World Future Society’s 2008 annual meeting held in Washington last July. With the development of state-of-the-art technologies, digital identities had expanded the capacity to pursue alternative satisfaction in cyberspace. In particular, this phenomenon will pose various legal threats to society, by infiltrating a whole array of societal worlds, such as politics, economy, society and culture.

Does a poet have the ability to foresee the future? The leading poet of the 1980s, Lee Sung-bok said, “The face behind a mask was a mask.” He added, “We need to learn how to humble ourselves, not to glorify ourselves.”

The phenomenon of multi-personas is drawing closer. We need to face up to reality.