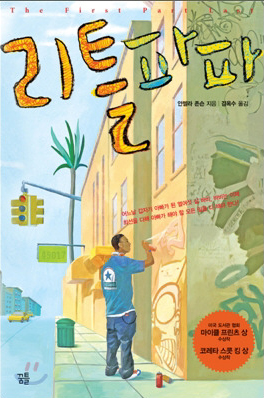 “The First Part Last” and “Hanging on to Max”

Sixteen-year-old Bobby’s life is turned upside down when his girlfriend Nia surprises him with news that she’s pregnant.

That’s tough enough for a teenager, but his life gets even more complicated when Nia suffers postpartum brain damage and lapses into a coma.

Bobby is left to care for their baby girl Feather all by himself.

The story tells how Bobby struggles to care for his daughter, wavering from utter devotion to despair that his life is slipping away.

His college plans to go to art school after he graduates are on hold, he’s lost his girlfriend and none of the grandparents appear willing to get involved.

Thought-provoking and challenging, “The First Part Last” was published five years ago and has recently been translated into Korean.

Author Angela Johnson avoids falling into the trap of exploring why Bobby and Nia find themselves in their predicament. Instead, she takes the view that teenagers get pregnant and their voices should be heard and not blanked out and ignored.

The story vividly describes the reality and concerns of life after the birth of the child, exploring how the parents adapt to their unexpected situation.

The key theme is responsibility.

Instead of portraying Bobby as a loose cannon for getting his girlfriend pregnant, he’s portrayed as a highly conscientious young man.

The author opens up Bobby’s life for us, detailing the challenges he faces daily.

Although he does the best he can given the difficult circumstances, Bobby sometimes almost loses the plot.

When Feather screams and throws tantrums, he has to remind himself that she is still his baby and he is the only person in the whole world who can look after her.

The irony is that none of the adults in the story are particularly responsible.

Bobby is left to fend for himself while the “responsible” adults turn their backs.

In “Hanging on to Max” by Margaret Bechard, published in 2003, Sam, another single dad, also takes on the responsibility of looking after a child by himself.

His girlfriend Britanny decides that she doesn’t want to be a teenage mother and tries to give Max up for adoption.

A full-time high school student, Sam is having none of it. He insists he will look after his son and so begins his tale, juggling the requirements of childcare and trying to graduate from high school.

Like Bobby in Johnson’s story, Sam doesn’t enjoy much support from his family.

In fact, his dad is angry that Max took on the baby when his girlfriend staged her walkout.

Sam, like Bobby, is a young man, beset by all the anxieties that most teenage boys go through.

While his mates are getting up to all the things that teenagers should be getting up to, he’s pushing a stroller around the park and thinking about what he should prepare for Max’s next meal.

Despite having his work cut out with Max, Sam does well enough at school to get solid SAT scores, but he can’t afford to go to college because he needs money to raise Max.

The key point in the story is when Sam’s dad turns on his son and tries to dissuade him from playing the role of the single dad.

Sam stands up to his dad and says that all his life he has been told to be a responsible member of the community.

And that’s exactly what he’s going to do, by hanging on to Max.

“The First Part Last” and “Hanging on to Max”