A passion that’s anything except routine

A passion that’s anything except routine 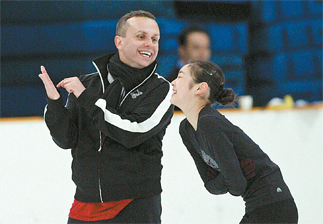 You can tell a lot about a person by his or her e-mail. David Wilson, the 41-year-old choreographer for Korean figure skater Kim Yu-na, is prone to emoticons, words in all caps and exclamation marks. And responding to e-mail questions by the JoongAng Ilbo, Wilson ended each of his messages with XO, cyberlingo for hugs and kisses.

Wilson’s messages dripped with exuberant energy and love for his work, which has been to turn Kim - “a choreographer’s dream,” he said - into one of the most expressive skaters today.

As Kim’s career has progressed over the years, her coach Brian Orser, a former Olympic medalist in figure skating, has grown to be almost a cult hero among skating aficionados here. But if Orser provides technical guidance for Kim, it’s Wilson, a Canadian native and former figure skater himself, who takes care of artistry in a sport where performance and interpretation of music are just as valuable as skill.

A choreographer is responsible for just that: creating figure skating routines in accordance with the chosen piece of music. That includes coming up with the right movements at the right time over the course of a routine and also taking into account the skaters’ physique so that they can best take advantage of their lithe arms and legs.

Wilson has done choreography work since 1994. His clients include Orser and the 2006 Olympic silver medalist Sasha Cohen, and Canadian stars Jeffrey Buttle and Joannie Rochette.

“Each person I work with has a different vibe and personal way of expressing themselves through movement, much the same way every singer has a different texture and tonality in their voice,” Wilson said. 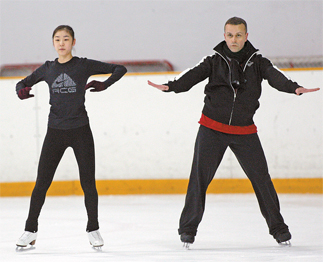 “The uniqueness of each client I’ve ever worked with is truly where I find most of my creativity. It comes down to personality and the soul of that person and finding a way to help them express their individuality in each piece we create together.”

Wilson and Kim have worked together since 2006. Today, Kim is an omnipresent figure in television commercials and other public appearances, seemingly as much at ease before cameras as on ice. But less than three years ago, Wilson recalled Kim to be “a very long, lean and serious-looking young girl.”

“The first day we worked together seems so long ago now; she’s changed so much,” Wilson wrote, punctuating his answer with one of his many winky-smiley emoticons.

“I remember just trying to make her laugh for the first two weeks! Such natural talent, graceful, fluid, beautiful soft lines, incredibly serious and hardworking, very sweet and a little bit shy ... these were all my first impressions of Yu-na.”

Wilson stressed he “never tried to make her get over her shyness.” Instead they found common ground in their love for music and went from there.

“I myself was also very shy when I was young. I found my way to express myself through an intense love of music. This is something we share,” he said. “We work toward connecting deeply with the music, [and] maybe this enables her to be free and what we see is her sincere interpretation of how the music makes her feel. 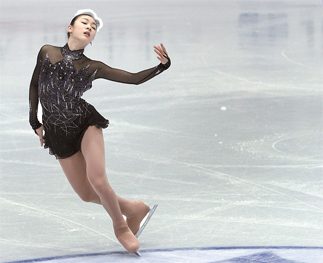 Kim Yu-na, 18, is considered one of the most expressive figure skaters today. [JoongAng Ilbo]

“There are no secrets or magic spells but a willingness to explore,” Wilson added. “And I’m very grateful to be able to help Yu-na find her own voice. She has a truly charismatic and creative spirit.”

For the 2008-09 season, Kim has chosen to skate her short program to “Danse Macabre” by Camille Saint-Saens, and her free skating to “Scheherazade” from a symphonic suite by Nikolai Rimsky-Korsakov based on “One Thousand and One Nights.”

Having competed in three international events this season, Kim captured two titles, Skate America and Cup of China, and finished second at the Grand Prix of Figure Skating Final. At each of those events, Kim led the field in the program component score, which assesses performance rather than technical aspects.

Before the season, Wilson and Kim sat down to select new music. He offered a glimpse into their discussion.

“Our choice to go with Danse Macabre this year was inspired by [the] feeling Yu-na needed a piece that had a lot of strength and dramatic tension behind it,” Wilson said. “I wanted her to feel powerful and the concept behind the choreography is just that.

“Yu-na expressed an interest herself in using Scheherazade this season,” Wilson added. “Of course, this is an epic tale of a beautiful slave girl who is the greatest storyteller that ever lived. The character embodies a courageous, fearless and charismatic beauty, which is perfect for Yu-na at this moment in her evolution as a young woman, athlete and performer.”

And judging criteria are heavy on details. Judges will look at everything from “physical, emotional and intellectual involvement” to “expression of the music’s style, character and rhythm.” Bang Sang-ah, a television commentator and former national figure skating coach, said because the scoring has become complicated, skaters must make themselves stand out from the pack.

And Bang thinks it’s something Kim has been able to do with help from Wilson.

“I think Yu-na and Wilson have been a very good team,” Bang said. “Wilson is known for bringing out unique characteristics in skaters and Yu-na has responded well to his challenge.

“Yu-na’s biggest strength as a performer is that she has expression in every one of her moves,” Bang added. “Her routines are always graceful and never boring.”

One former executive with the Korea Skating Union, who declined to be named, also stressed the importance of choreography. She said since skaters ranked inside the world’s top 10 are almost inseparable in terms of their techniques, choreography can make the difference.

“Judges will look at how skaters connect with the audience, how the fans in the stands respond to their performance,” the former executive said. “Wilson has been great at recognizing what works best for Yu-na and at building her programs around the music. Yu-na has become much more expressive.”

Wilson reached into his reservoir of adjectives and found the words “regal, versatile and sincere” to describe Kim today.

“Yu-na has an inborn dignity and sophistication that is very rare, natural and very precious,” Wilson said. “And she’s a chameleon and has many facets to her personality. In my mind there are many styles of music she can perform to and make her own unique stamp on the skating world.

“To me, there’s something very honest and pure about the emotional quality she brings to our work together,” Wilson continued. “Everything from her way of relating, the simple purity of her skating style and technique, to her beautiful subtle way of expressing the music through our choreography ... she is, without any doubt, a choreographer’s dream.”

For all Kim’s recent success, though, Wilson thinks she has only begun to scratch the surface.

“Yu-na’s potential is limitless,” he said. “She’s already, in three short seasons, come from being a shy young girl with braces and blossomed into a beautiful, sophisticated young woman with movie star charisma on the ice. She’s become a worldwide sensation and is carrying that role with grace and humility.

“The sky’s the limit for her and she’s very deserving,” Wilson said.