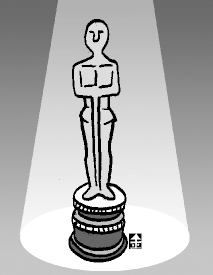 But Collard never got to kiss the golden trophy at the ceremony because he died of AIDS three days before the event.

The late actor Heath Ledger won a Golden Globe award for best supporting actor on Sunday for his excellent performance as the Joker in the Batman film “The Dark Knight.”

But we were deprived of seeing the winner appear on stage to accept his accolade.

On Jan. 22, 2008, Ledger was found dead in his apartment at the age of 29, six months before the film’s official release.

Ledger rose to prominence as an actor by building his credentials at a young age.

His breakthrough was a nomination for an Academy Award for Best Supporting Actor in 2006 for his role in “Brokeback Mountain.”

After the recent Golden Globe win, Ledger’s fans anticipate that the Australian actor might win a posthumous Oscar.

In the 80-year history of the world’s premier cinema awards, Peter Finch is the only actor to have won an Oscar after his death.

He didn’t win either.

The great actors Spencer Tracy, Ralph Richardson and Massimo Troisi were Oscar nominees after their deaths, but they failed to win. Perhaps members of the Academy are wary of crossing the psychological wall between life and death.

Winning a posthumous award is a truly impressive achievement. It is one of the greatest tributes that people can bestow upon artists who pour their soul into their work until the last moments of their lives.

Of course, in war, it is usual to decorate soldiers who died bravely in battle.

In contrast, though, the rules governing the Nobel Prize state that a dead person cannot receive an award.

This proviso is meant to deter sentimentality from creeping into the judgement process.

Can Heath Ledger, whose performance as the Joker ranks him as one of the top movie villains in cinematic history, cross the wall?

We are looking forward to seeing the 81st Academy Awards winners next month.


The writer is an entertainment news editor of the JES.