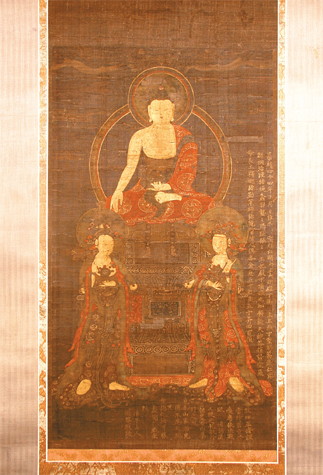 “Sakyamuni Buddha Triad,” an early Joseon period painting, commissioned by Queen Munjeong as part of a project of 400 artworks to help speed the recovery of her sickly royal prince and help her conceive another son. The painting was discovered in Japan and purchased by the Mary and Jackson Burke Collection in 1990. [Yonhap]

This was the case for Queen Munjeong when her son and heir fell ill.

The Queen’s concern for her sickly son and her failure to produce another motivated her to order 400 Buddhist artworks, which included 50 paintings in supplication for the recovery of the royal prince and the birth of another child.

The project started in 1563 and was completed two years later, but the prince died.

Fast forward to 2009; only six of those ancient paintings are known to still exist.

While one of the paintings, “Bhaisajyaguru Triad,” is currently on display at the National Museum of Korea in Seoul four are in Japan.

The last, and most talked about piece, is the “Sakyamuni Buddha Triad,” which is kept in the Mary and Jackson Burke Collection in New York.

Discovered in Japan, the painting was purchased by the Burke Collection in 1990.

A group of seven Koreans campaigning for the return of cultural assets visited the private museum recently, and found the Sakyamuni Buddha Triad to be in excellent condition.

The ancient painting is considered by experts in the field and those in the Buddhist community to be one of the most important Buddhist artworks produced during the early Joseon period (1392-1910).

“The Sakyamuni Buddha Triad, which formerly belonged to Heam Temple [Yangju, Gyeonggi] can be considered a representative Buddhist artwork from the Joseon period,” said Bae Young-il of the Department of Fine Art, National Museum of Korea.

“The painting is significant not only to the Buddhist community but also to Korean history since such paintings from the Joseon period are rare. Buddhism as a state religion was gradually supplanted by Neo-Confucianism,” Bae added. 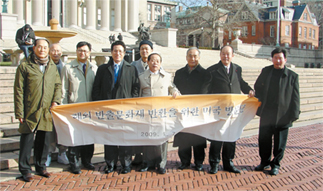 A delegation poses in front of Columbia University, New York, on Jan. 8 during a trip to the U.S. to seek the return of Korean relics. Buddhist monk Hey Moon is second from left.[NEWSIS]

Hey Moon, who extended his trip to wrap up some research and administrative work, met with the curator of the Burke Collection and requested a loan of the painting.

The delegation’s goal is to have the painting from the Burke Collection brought to Korea in time for the September 2010 opening of the Heam Temple Museum.

The curator at the Burke Collection could not give a definite answer, but he said a loan is a definite possibility if the Koreans go through the appropriate channels for a formal request.

“If the Burke Collection approves the loan, it will give us an opportunity to exhibit all six remaining Buddhist paintings, including the painting at the National Museum of Korea and those in Japan,” said Jung Byeong-guk, a National Assembly representative from the Grand National Party and a member of the delegation that traveled to New York.

“All representatives we spoke to in New York and Boston, including those at the Burke Collection responded positively to the possibility of a loan and we are currently waiting for some good news,” said Lee Su-geun.

There were many stops in the New York and Boston area and much work to be done by those working to have lost treasures from Korea’s ancient past returned.

Another stop on the trip was at the Arthur M. Sackler Museum, one of Harvard University’s art museums, to check on the Gregory Henderson Collection.

Henderson was a former U.S. Foreign Service officer in Korea and Washington and an avid collector of Korean art. 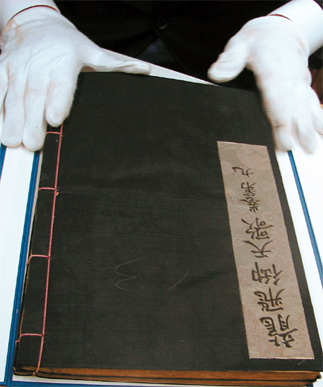 “The Henderson Collection at the Sackler Museum is widely considered the finest collection of Korean ceramics abroad. A special exhibition of the collection was held in 1991. It is currently not on public display,” said Hey Moon.

Another significant collection, named after a late antique book dealer in Korea, is the Yi Song-ui Collection at the C.V. Starr East Asian Library’s Rare Book Room at Columbia University.

Acquired by the university in the late 1960s, these rare books from the Joseon Dynasty, some of them dating back as far as the early Joseon period, were printed with movable metal type. The books are not available for public viewing.

Although some artifacts are off limits, Hey Moon is undeterred.

“Korea lost many treasures to Japan during the colonial years and to the U.S. during and after the Korean War. While it can be good to have some of these treasures on display aboard for a wider audience to see, every effort should be made to return items that were either looted or taken illegally.”