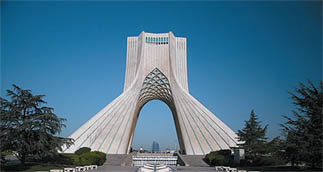 Azadi Tower stands at the gateway to the Iranian capital, Tehran. Provided by the Iranian Embassy

Iran is still an unfamiliar country to many Koreans due to the geographic distance and cultural differences that separate the two nations.

However, Korea is well-known in Iran. The hit TV drama “Dae Jang Geum (Jewel in the Palace)” caused quite a stir in this Islamic country when it aired from October 2006 to November 2008.

The show earned astonishingly high audience ratings: 86 percent across the country and over 90 percent in the capital Tehran, according to the Iranian Embassy in Seoul.

Following up this surge in interest in Korea, Iran held “Iranian Tourism Night” in Seoul last Tuesday at the Lotte Hotel.

The event, which was hosted by Iran’s Cultural Heritage, Handicrafts and Tourism Organization and the Iranian Embassy in Seoul and sponsored by the Korea Tourism Organization, was carried out in timely fashion as the country’s vice president was on a visit to Korea last week.

“I hope this tourism promotion event will be an opportunity for Iran and Korea to promote bilateral relations while increasing economic and cultural exchanges,” said Iranian Vice President Esfandiar Rahim Mashaei at the event.

He was in Korea for “Climate Change, MDGs and World Tourism,” an international forum held by Korea’s Ministry of Culture, Sports and Tourism with the participation of the UN World Tourism Organization.

The aim of the meeting was to discuss trends in world tourism and measures to combat climate change.

“I know that Korea achieved a great deal in a short period of time. Since there are many tourism development projects going on in Iran, I urge Korea to take advantage of those opportunities by making active investment in Iran,” the vice president added.

Mashaei and Korean Culture Minister Yu In-chon signed a memorandum of understanding to promote tourism and cultural ties between the two countries earlier in the day.

The agreement included omni-directional cooperation between the two nations in the field of tourism, ranging from the development of the tourism infrastructure in both countries to promotion of tourism-related personnel exchanges and events.

“I hope the people of our two countries will have the opportunity to understand each other better through active cultural exchanges, including tourism,” Mashaei said.

Cultural exchanges have played a key role in reducing the sense of distance between Koreans and Iranians, Mashaei said, citing the “Glory of Persia,” an exhibition held by the National Museum of Korea last year. 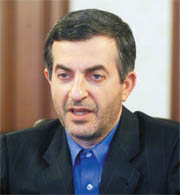 The Persian exhibition, which took place in Seoul and Daegu, drew more than 800,000 visitors, according to the Korea Tourism Organization.

Korea and Iran established diplomatic ties in 1962, but exchanges between the two countries date back thousands of years.

The Silk Road that connected Asia and the Middle East was the main thoroughfare through which cultural and commercial exchanges took place, said Korea Tourism Organization CEO Oh Jee-chul in his speech at the event at Lotte Hotel last week.

“Once there was an ancient tomb of the Silla Dynasty where relics pertaining to the Parthia Dynasty were found, which is evidence of exchange between our two countries a long time ago,” said Oh.

“In fact, Korea and Iran have a lot in common in that both of us have a long history and culture from time immemorial.”

Oh went on to say that this Iranian Tourism Night will serve as an opportunity for the two countries to increase exchanges in the field of tourism and expand cooperation to other areas such as economy and diplomacy.

It’s no secret that Iran doesn’t attract a large number of tourists. But Tehran wants that to change.

The plan also lays out the framework for earning $25 billion from international tourism, 2 percent of the international share of tourism income, by 2025, and attracting $30 billion investment in tourism.

All the signs suggest that Iran has strong potential to grow into a tourism power. It boasts an ancient civilization, over 1.2 million listed national properties, and World Heritage Sites designated by Unesco, including 12 ancient churches that have been recently designated.

“Like Korea, Iran also has four seasons, which offer different experiences in different regions throughout the year,” said Shafiei Karaji, chairman of Seoul International Shipping Company, who gave a presentation on tourism in Iran at the Lotte Hotel event last week.

A relatively small number of Koreans visit Iran each year, but Seo Bo-kyoung, an official at the Lotte Tour Travel Agency, says his company has seen the number rise by 2.5 times annually since 2006.

“Koreans still don’t think of Iran as an accessible country because of the geographic distance and lack of information,” Seo said.

However, more Koreans are venturing to the Middle East, he said, and the travel agent said he was confident that Iran in particular, which has a long history and many cultural heritages for tourists to sample, would attract more visitors in the future.