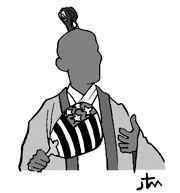 Zhuge Liang was the wall that Sima Yi could not breach in his lifetime. Every battle he waged against Zhuge Liang ended in defeat. No matter how hard he racked his brains, he found no way to cope with Zhuge Liang’s mysterious strategies. His own generals and troops conceded in hushed tones, “Zhuge Liang’s strategies are far superior.”

After Zhuge Liang’s death, Sima Yi still had to swallow his pride as the dead master strategist managed to ridicule him. After hearing news of Zhuge Liang’s armies retreating, Sima Yi rushed to attack. However, when he saw the dead man’s four-wheeled carriage carrying a wooden statue made in his image, Sima Yi turned tail in fear. After that, people began to say, “A dead Zhuge scares away a living Sima.”

The term “my mother’s friend’s son” refers to a person who is superior to oneself in every way and makes one feel inferior. These days, President Lee Myung-bak may also be suffering from the same complex.

Imagine how awkward Lee must feel whenever he is compared with U.S. President-elect Barack Obama, who is young, intelligent and good-looking, with capable leadership skills as well. It’s Lee’s bad luck to have the same job as Obama in the same period. He must feel like a professional golfer who plays in the Tiger Woods era.

As if to rub salt in the wound, Lee’s mom’s friend’s son across the ocean also maintains an upstanding family life. Although caught up in the hurly-burly of life as a senator, he had dutifully gone to buy ant spray at his wife’s request after work. In his 2006 autobiography, “The Audacity of Hope,” he wrote a story that after the birth of his first daughter, Malia, he changed her diapers, fed her and lulled her to sleep until dawn so his wife could rest.

It’s hard to imagine Lee, who had never attended the births of his four children, carrying out such domestic errands. Nor do we expect Lee to suddenly become a domesticated family man, as he seems more preoccupied with befriending big business.

The only hope we have for Lee is that he learns from Obama’s leadership and contributes to the advancement of the nation’s politics while reinvigorating the economy. Unfortunately for Lee, he will have to endure more complaints from the public after Obama’s inauguration.

But we believe Lee will not be intimidated and comparisons with Obama may yet bring out his best. He may even become smart enough to beat the son of his mom’s friend. After all, in “Romance of the Three Kingdoms,” who wins in the end is not Zhuge Liang, but Sima Yi.