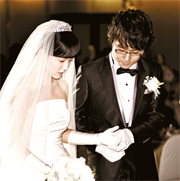 The icy winter snow started melting last Saturday, and so did the hearts of couples who got married that day.

Ballad singer Lee Se-joon, 37, tied the knot with a bride only identified as Kang, 29.

The wedding took place at a wedding hall in Yeouido, Seoul.

Lee met Kang, a professional English-Korean translator, five years ago. She was a fan.

Lee appeared on the music scene in 1997 as one of two members of Yurisangja, which means a glass box. Park Seung-hwa, the group’s other member, sang at the wedding.

Lee Kyung-eun, a member of the female trio Chakra, also got hitched, to a pro golfer identified as Kwon.

The wedding took place at the Shilla Hotel in central Seoul.