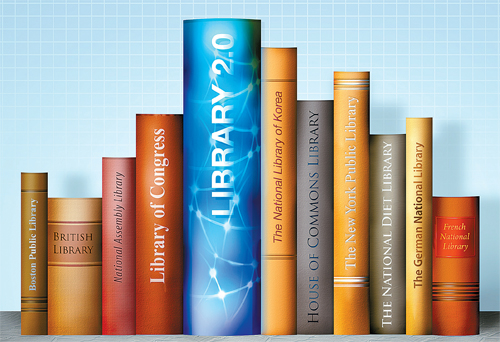 Get ready to hit the latest hot spot in town.

A new club in Apgujeong? Hardly. Try the local public library instead.

In the speech he made during the opening session of the American Library Association conference in Chicago in 2005, Obama said:

“It is a pleasure to address you today because of what libraries represent. More than a building that houses books and data, the library has always been a window to a larger world - a place where we’ve always come to discover big ideas and profound concepts that help move the American story forward.”

Perhaps it’s not surprising that Obama has a soft spot for libraries. After graduating from Columbia University, he found his first job through the Job Information Center in the Mid-Manhattan Library, a branch of the New York Public Library.

The librarian there gave him information and career contacts and he duly sent application letters off. Soon after, he was offered a post at a community center in Chicago.

Arguably, if it weren’t for the library, Obama wouldn’t have gone to work in Chicago, where he eventually began his political career.

As Obama said, libraries are not just dusty rooms filled with books. Rather, they have become a space for public communication.

The New York Public Library, for example, shuts from time to time to hold various events for children.

It also lends its space to couples looking for an unconventional but memorable wedding. The New York Public Library was where Carrie from the 2008 film “Sex and the City” had planned to get married.

You might wonder why a style icon like Carrie would want to get married in a library. But she was, as usual, ahead of the fashion curve: a U.S. wedding magazine last year chose the venue as “New York’s best place to get married.”

Other libraries around the world are also turning from traditional and conventional to modern and artistic.

The Seattle Public Library is a landmark designed by noted Dutch architect Rem Koolhaas. It has an open outdoor space for passersby to relax and perhaps even feel artistically inspired.

Of the 3,100 public libraries in Japan, many are dedicated solely to certain subjects, including libraries that have only comics or cookbooks.

In France, musical concerts and art exhibitions are often held in libraries. Of the country’s six national libraries, the biggest is the Francois Mitterrand Library in Paris, built in 1990 by the former president. The library is one of the pioneers in digitizing its catalogues.

Modern libraries also provide services for a wider range of visitors, such as more books in Braille for the visually impaired.

Frank Kurt Cylke, the director of the National Library Service for the Blind and Physically Handicapped, part of the U.S.’s Library of Congress Network, said Congress recently invested $5 million in publishing books in Braille.

The Netherlands, Sweden, Norway and Denmark also have public libraries catering to the disabled. In 2007, Korea established a center to support national libraries for the disabled.

Though many efforts are under way to revive the popularity of libraries, cynics ask if they’re still relevant today, particularly since we can now easily access information from many sources via the Internet.

Noh Woo-jin from the National Assembly Library, however, has no doubts. He says that libraries are a source of correct and reliable information.

“The role of libraries has become more important today with the inundation of unreliable sources of information,” Noh said, arguing that books - both hard or digital copies - rarely publish inaccurate information.

The “Ask a Librarian” system is one of the programs widely used today, Noh says, and sets libraries apart from Internet sources. The system is common in most libraries in the United States and Europe.

It’s similar to search portals in the sense that it’s a place you ask a question and another online user answers.

The difference is, however, that “a professional librarian answers your inquiries based on established facts. You can ask questions around the clock and you’ll receive reliable information.”

To distinguish themselves from Internet portals and blogs, libraries often collate large amounts of information, check their accuracy and then publish fact books or reports.

Many libraries today are also going electronic. Korea’s National Assembly Library, for example, is currently implementing a project to offer and preserve information online. It is also publishing fact books.

A week after President Obama was elected last year, the assembly library put out a fact book on Obama’s life and policies.

“The library is currently putting together a fact book on Korea’s first ladies,” said Yoo Jong-pil, the chief librarian at the National Assembly Library. (Interview below.)

He says changes to modernize local libraries are expected. “But Korea has a long way to go to stand side by side with other advanced, Western libraries.”