Korea through a Japanese lens

Korea through a Japanese lens 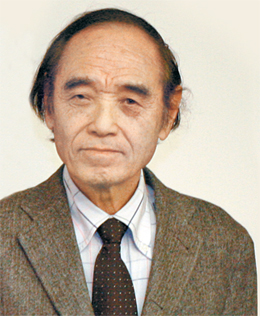 Shisei Kuwabara at the opening of his latest exhibition. Provided by the museum

Shisei Kuwabara was a 27-year-old photographer with ambition when he got on a Japan Airlines flight bound for Gimpo International Airport, Korea on Aug. 3, 1964.

It was his first trip abroad.

“My heart was about to burst, I was so nervous and anxious,” Kuwabara reminisced. “My heart calmed a bit as I went through immigration and customs clearance. And when I stepped out of the airport, I was excited with the thought that my coverage of Korea is finally beginning.”

Kuwabara is now 73 and living in Japan with his Korean wife. In a facsimile interview with the JoongAng Daily, with Mrs. Kuwabara helping with translation, Kuwabara vividly described his feelings upon arrival, perhaps something that even the passage of time cannot take away from the veteran professional photojournalist.

Before he first came here, Kuwabara knew little about Korea. A Korean friend in Japan had taught him the Korean folk songs “Arirang” and “Doraji” in college, and he had studied about Korea for six months before coming here. But the scenery that spread before him that summer’s day in 1964 was anything but familiar. 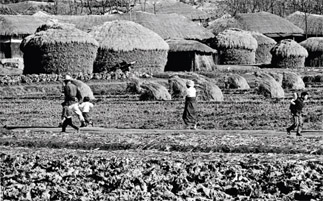 Farmers in South Gyeongsang, 1965. Provided by the museum

Korea in the 1960s was defined not only by the post-Korean War devastation, but also the political turmoil that engulfed the whole country. General Park Chung Hee, the late Korean president, seized power in 1961, following months of tension, in a military coup that led to decades of dictatorship.

On his way to downtown Seoul from the airport, Kuwabara noticed sections of the dusty road were still unpaved. He was surprised as he went about the city that a lot of Koreans understood Japanese. Already 19 years had passed since Korea had gained its independence from Japan, and Kuwabara saw these “remnants” of Japanese colonization.

What made this young Japanese man fall in love with Korea was what he described as “the beauty of sorrows.”

“It was something unique to this country, caught in the swirls of the Cold War and eventually split in half. It was also something that came into being through all that these people had to go through,” he said. 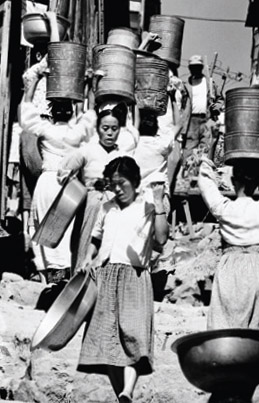 For the next 40 years, Kuwabara flew back and forth between Japan and Korea, capturing Korea through his lenses - its political, social and cultural scenes.

With his camera as his constant companion, he captured the violent student protests against the Korea-Japan summit in 1964, the dispatch of South Korean troops to Vietnam in 1965, and U.S. military campside towns, among others.

“What Kuwabara achieved should have been done by a Korean photographer,” said Han Jeong-sik, photographer and honorary professor at Chung-Ang University.

“But unfortunately, no Korean photographer was in a position to or had the experience. In that sense, we should be grateful to Kuwabara. He recorded a chunk of our history that we couldn’t,” Han said.

Before coming to Korea, Kuwabara had already made a name for himself photographing victims of mercury poisoning in the city of Minamata in Kumamoto Prefecture, Japan in 1962. But none of those shots would have as great an impact as his pictures of Korea.

“For me, Korea is like an epic novel. I think it might have been fate that brought me to Korea,” he said.

Along the way, Kuwabara met his lifetime partner, his wife. The two got married in 1970. Kuwabara says his wife helped him understand Korea and the people better, not just in terms of language, but also the context and emotions.

In his recently published book, “The Violent Changes That I Saw in Korea,” Kuwabara expresses deep regret and guilt over how he failed to document the Gwangju Democratization Movement in May 1980. He was in Seoul the day the movement erupted, after a two-day trip to Busan to shoot a local craftsman. 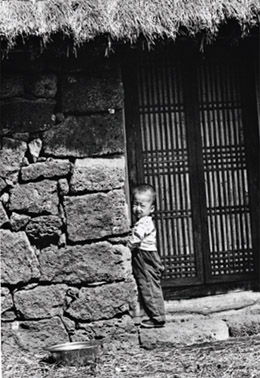 When Kuwabara heard about the incident from his wife, who was then in Japan, he was desperate to travel back south and document it. But he couldn’t, he says, because he lacked the appropriate credentials and visa. He was among the crowds watching a mask dance at Deoksu Palace, central Seoul, lamenting, “Does anybody here know what’s going on in Gwangju at the moment?”

The Korean government at the time gagged any news coverage of the incident.

Kuwabara has held several photo exhibitions in Korea over the years. But the current one at the Museum of Photography, southern Seoul, shows yet another side of his photographs of Korea.

The 66 shots, many of which are on display for the first time, capture the lives of Koreans in farming and fishing communities. The peaceful, rustic scenes and the innocent faces seem quite different from Kuwabara’s signature photographs of turbulent Korea in modern times.

“The essence of photography is documentation. Even if years go by, a photo doesn’t weather. If anything, it becomes even more lively evidence of history,” Kuwabara said.

“In a fast-changing society like that of today, people tend to take a step back and look backward. If through my photos I can get across to the next generation some part of me and my subject, I will be grateful as can be.”

The Kuwabara Shisei exhibition at the Museum of Photography, Seoul in Songpa District runs through Feb. 21. Call (02) 418 1315 or visit www.photomuseum.or.kr for details.