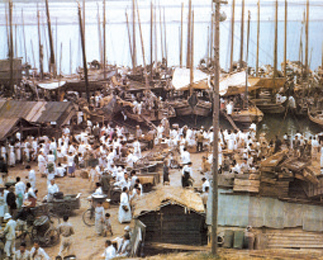 Landing stage at Mapo on the Han River in the 1940s. [JoongAng Ilbo]

Old photos provide a much-needed perspective on our lives.

In a snapshot from the 1940s, part of a recent exhibition of old photographs at Seoul World Cup Park in Mapo District, Korean merchants dressed all in white mill around the ferries at the landing stage at Mapo on the Han River.

It’s a bucolic scene, one that is hard to envisage when you cast your eye over the gray high-rise office blocks that dominate Mapo District today.

But a string of recent photo exhibitions like the one in Mapo has given the general public a chance to reflect on the past and better appreciate how far this country has come in an incredibly short time.

“Now we’re in the 21st century, people like to look back over the past century,” said Ahn Chang-mo, an architecture professor at Gyeonggi University.

“Also we’re richer, we can afford the luxury of reflection.”

For years, Koreans have tended to look to the future only and refrain from mulling over the past. The peninsula went through profound political and social upheaval in the late 19th century and the mid-20th century - a 500-year-old dynasty fell, Japan annexed Korea, a brutal civil war split the country in two and millions were condemned to poverty.

These changes had a profound impact on the country and the metamorphosis was painful, but the recent photo exhibitions that have sprung up around the capital indicate a growing interest in contextualizing and understanding recent history.

One such exhibition at the National Palace Museum of Korea in Gyeongbok Palace presented 50 rare photographs from the 1940s and ’50s.

“About 100,000 visitors have come since the opening in Dec. 16,” said Park Beom-seok at the Jongno District Office, which co-organized the exhibition with the museum. “We thought the public would respond because when times are bad, people want to look back on the old days. That is why we organized such an exhibition in the first place,” said Park. The exhibition, which runs through Feb. 1, is called “The Time of Seoul: Memories of Jongno.”

In addition, there was a photo exhibition last November in Deoksu Palace to mark 125 years of Korea-Germany diplomatic relations. It showcased 125 rare shots from the late-19th to early-20th century.

In August, the Seoul city government held a photo exhibition called the “Han River Renaissance,” showcasing 40 pictures of the river from the 1950s to ’70s. In one of the photos you can see people cutting chunks of ice from the frozen river. These were the days before refrigerators.

The photos at these exhibitions are incredibly rare.

“Although there is no shortage of original 19th-century photographs of many countries [in this region], Korea is a notable exception,” writes Terry Bennett, a collector of old photos, in his book “Korea: Caught in Time.”

“It’s no exaggeration to say, for example, that for every one Korea print dating from the 1880s, I’d expect to see 500 prints of Japan. The ratio for the 1870s would be worse, and 1860s Korean prints may be nonexistent,” he continues.

Bennett claims this is because Korea didn’t open its doors to the West until 1882 and that the extreme devastation that the country experienced hampered the preservation of photographs.

But now, Korea has developed a wealthy middle-class, despite the ongoing economic slump, and people have more time to pause and reflect.

“For the last couple decades, everything has been about development,” said Park Ju-seok, a professor at Myongji Graduate School of Archival Sciences.

“Everywhere we go construction is going on. We hardly find a place that retains its original form. I think people have reached a point where they are tired of these developments and long to retrace their steps,” Park said.

The professor argues that postmodernism has been the key issue in the academic world for the last decade or so, but in order to understand postmodernism, people should first understand modernism.

“Photography was born at the advent of modern society. So it’s only natural that academic circles refer to visual sources like photos when studying the era.” 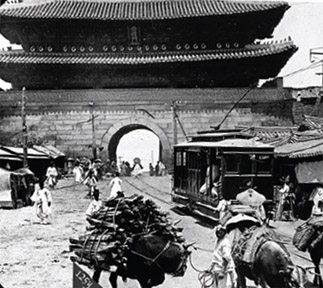 An old photo of Namdaemun, presumed to be from 1904, displayed at last year’s exhibition in Deoksu Palace. [JoongAng Ilbo]

Experts also stress the importance of collective efforts to preserve, verify and read these photos. Many of the earliest photos from the period were taken by foreigners and today most of them belong to private collectors.

Park points to an alleged photo of Queen Min (1851-1895), the wife of King Gojong, as an example of the need to better catalog extant images.

According to Park, the same photo has been printed in about 18 to 20 publications worldwide, all with different captions. Korean historians have yet to agree on whether or not the woman in the picture is in fact the queen.

“If Koreans really want closure on their modern history and move on, there must be a central, systematic move among researchers in relevant fields to investigate and archive the photos,” the professor said.

Park led a group of researchers at Myongji University-LG Yeonam Library studying and cataloging books on old Korea written by foreigners as well as photos from those books.