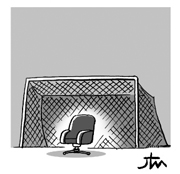 Scoring has long been a weakness for Korean football. Our players are great at dribbling, able to skillfully outfox their opponents on the way to the goal box. But once they get to the goal and have the opportunity to shoot, they lose timing or adroitness to kick the ball successfully into the back of the net.

Football is a sport in which the outcome is determined solely by scoring goals.

Whether the ball sails through the goalposts or not determines who wins and who loses.

Managing our doors and boundaries is also very important in our everyday lives. In ancient Asian societies, the scene outside one’s doorstep reflected the social status of the house owner.

The expression, “It’s like a marketplace outside the door,” is used when a crowd flocks around a high-profile official’s house and frequents his doorstep.

“Carriages form a stream and horses line up like a dragon” is another sarcastic portrayal of a parade of people eager to brownnose those with power and authority.

But there is always the opposite scene: Power is also like a bubble that can well up and then pop at any moment. “The cold and desolate streets outside the door” describes the scene outside a family fallen from grace.

An ancient Chinese poet wrote, “doorsteps are quiet and carriages and horses are no more.”

The ancient Chinese historian Sima Qian, author of “Shiji,” or “The Records of the Grand Historian,” gave accounts of how empty and fleeting power can be with a story of two officials shunned by their king for making honest suggestions.

“The streets outside their doors were so desolate that they could set up nets to count birds.” The story shows how fickle and ephemeral human temperament can be, and fragile before power.

A virtuous man takes good care of his doors. He should keep his doors shut to those with honeyed words and gifts. He should scrutinize before befriending anyone and keep his distance from greed and corruption.

And this all starts at the door.

The New Year has dawned and the appointments season is back. The government has reshuffled officials in key cabinet ministerial and vice-ministerial posts.

We don’t see lines of carriages and horses outside the doors of the powerful, but corruption nevertheless persists in today’s world of power. Government officials capable of differentiating what is personal and public and who are free of greed make up a stable country.

The new faces in the government posts amid difficult economic times should mind their doorsteps as well as the words of Confucius, that they bear heavy responsibilities and have a long way to go.