Books that let pictures do the talking

Books that let pictures do the talking 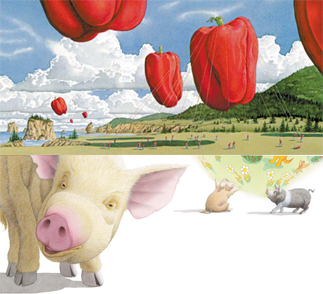 
How far does your imagination stretch? There’s a thought to ponder at the First CJ Picture Book Festival.

David Wiesner, an American author and children’s book illustrator, says, “There’s no limit in imagination in picture books. They may be short in length but they suggest so much more.”

Wiesner is the winner of three Caldecott Medals, an annual award given by the American Library Association to the best published storybook author. He was recently invited as an honorary guest artist to the Picture Book Festival.

As part of the festival, the museum is displaying some 100 storybooks and 50 illustrations by artists from all over the world, including Italy, France, Australia, Iran, Russia and Korea. The works were selected from artists in 46 different countries.

His works seem simple at first glance, but they portray imaginative themes and voices through visual images rather than written words.

For example, June 29, 1999 is a story about a girl named Holly Evans living in New Jersey. One day, something unusual happens to Holly - giant vegetables, including cucumbers, broccoli, turnips and lima beans, start raining down from the sky.

Three Pigs is a picture dialogue of three brother pigs and their journey through the world.

“I’ve been greatly inspired by many storybooks from different cultures,” Wiesner said in a phone interview yesterday. “And I’ve been inspired once more in Korea. I met with storybook publishers and illustrators here and it’s exciting what’s being done. The artists are so enthusiastic.”

In fact, the market for picture books is growing here, according to Chun Sang-hyun, one of the festival’s organizers. “Picture books are a rising art, not only for children but also for adults,” he said.

The exhibition runs until March 1 at the Sungkok Art Museum in Jongno, central Seoul. To get there, go to Gwanghwamun Station, line No. 5, exit 7. Forums and seminars are also scheduled for Feb. 14 at the CJ Assessment Center in Pil-dong, central Seoul. For more information, call (02) 338-6672 or visit www.cjbook.org.