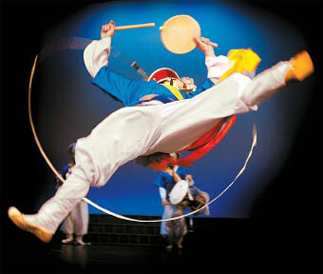 A scene from a traditional farmers’ dance at Chongdong Theater. Provided by the organizer


Korea sees a massive exodus of people returning to their hometowns every major holiday, resulting in terrible congestion on the main expressways. This leaves the capital pretty empty, the perfect chance for performance art lovers to indulge in theater, musicals and concerts.

Chongdong Theater in downtown Seoul will showcase a series of traditional performances, ranging from well-known repertoire like percussion quartets and gayageum (Korean zither-like string instrument) groups to the graceful fan dance and sarangmoo, or lovers’ dance.

At the National Theater of Korea, also in the downtown area, the National Orchestra of Korea will perform gugak, or traditional music. The orchestra has been staging this show for children and their parents since 2004. It’s a way for kids to learn about traditional musical instruments through a plot inspired by a folktale but with an added modern touch.

Audiences are encouraged to participate in the singing and dancing, and they even get a chance to play some of the instruments.

Regular performances of traditional music and theater in the show “A Winter Tour in Korean Music” will continue at Seoul Namsan Gugakdang near Namsan Hanok Village every Wednesday, Friday and Saturday.

The Namsan theater will also offer a special New Year program that consists of drum dances, gut (traditional rituals) and expert commentaries, among others.