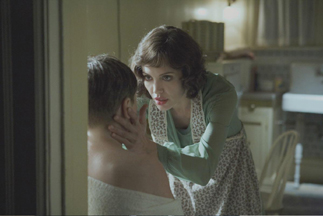 Cassandra, Lady Macbeth, Britney Spears - all of the above fit into the role of madwoman.

Crazy ladies, if you will, are a compelling subject, if only for bystanders to speculate on the reason behind their wild antics. These women - or rather, one in particular - are the notion director and producer Clint Eastwood probes in “Changeling.”

The “crazy lady” in this case is Christine Collins (Angelina Jolie), a single mother in 1920s Los Angeles whose only son, Walter, goes missing. Jolie starts pouring forth the emotions early in the film, distraught as the police refuse to take a missing person report within 24 hours of the boy’s disappearance. Christine continues to worry herself sick, in true emotive fashion, over the next five months until lo and behold, the LA Police Department says they’ve found Walter.

Only they haven’t found him - this is all too evident to Christine once she sets eyes on her changeling.

Yes, the LAPD has found a boy, but he’s three inches too short and circumcised. But when Christine voices her doubts about the fake Walter, the police are quick to shroud her in insanity.

What follows is an all-too-predictable, stereotypical “female” response, marked by Jolie’s hoarse outbursts to police captain J.J. Jones (Jeffrey Donovan) and his stooges. The audience, of course, knows what the Angelenos in the film don’t, which is that Christine is in fact sane and that she’s merely being painted as unstable by a corrupt police department eager for some good press.

Christine, an honorable, devoted mother, becomes a victim of her sex, a fact that Eastwood repeatedly reminds us of. Phrases like “a mother’s heart,” “intuition and emotion” and even the line “Everybody knows women are fragile” pepper the script - even Christine and her advocates can’t seem to shake the idea that her very real claim is somehow founded on something as tenuous as emotion.

Eastwood and Jolie contrast these histrionics, though, with a placid Christine as she progresses in her plight. Near the halfway point, Jolie ditches her open-mouthed grimace and sobs for serenity. It’s quite a performance, and she’s not alone in her star turn, with support from the ever talented John Malkovich as Rev. Gustav Brigleb, one of her allies against the LAPD, and Donovan as the coolly snide Jones.

But as too many recent movies have proved, a fantastic cast can’t rescue a plodding screenplay. The narrative even features one of those “in the nick of time” coincidences - a personal pet peeve - when Malkovich’s Rev. Brigleb rescues Christine from abusive electroshock treatment just as the nurse is about to turn the dial.

Then there are just some purely maudlin moments that fail to elicit any emotional response, even though I’m a sucker for parent-child story lines. The plot, based on true events, just gets yawn-worthy as justice is served.

It’s a shame, too, since the true events of Christine and Walter Collins’ saga are chilling enough on their own. Eastwood is able to hearken to these shocking realities in some thrilling, disturbing scenes that make the audience sit up and take notice, but he fails to sustain the viewers’ interest.