Spoof fails to score on any count

Spoof fails to score on any count 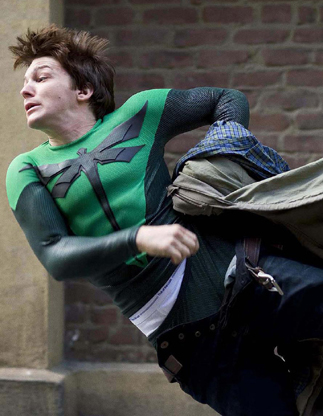 Written and directed by Craig Mazin, “Superhero Movie” seems to have benefited from the success of the “Scary Movie” series.

That is, Scary Movie managed to set the bar so low in terms of audience expectations, Superhero Movie couldn’t go far wrong despite being a spoof movie of the crassest kind.

Superhero Movie is largely based on the first “Spider-Man.” Our hero is high school geek Rick Riker (Drake Bell), who gets stung by a genetically modified dragonfly during a field trip.

If there’s a difference between him and Peter Parker, it’s that Rick is Dragonfly, not Spider-Man. He has superpowers but can’t fly.

Rick, like Spidey, is an orphan, and is in love with the girl next door, Jill Johnson (Sara Paxton).

But Jill’s a popular girl who already has a boyfriend, Lance Landers (Ryan Hansen). And Lance’s uncle is actually a super villain, Hourglass (Christopher McDonald).

Hourglass must kill a human every day in order to prolong his life. Rick develops his superpowers to confront the enemy and becomes a hero.

The movie provides few witty digs on society or big laugh-out-loud moments, although there are many references to “Spiderman,” “Fantastic Four,” “X-Men” and “Batman Begins,” which is one reason to watch. Superhero Movie makes a desperate attempt to get the audience laughing, but it only makes us chuckle or giggle at best.

The problem is that it’s poorly executed toilet humor. Most of the jokes involve bodily noises, vomiting or other excretory functions, and there’s only so much cringing and being grossed out one person can take.

He even used a YouTube clip of a fake Tom Cruise interview, in order to lampoon the actor’s Scientology testimonial.

I did laugh when Rick says “I’m sorry, but you’re no longer in my Five,” whenever he is annoyed.

However, I had to wonder what the Superhero Movie parody was for. Is it just a parody of parodies? There was absolutely no sharp satire hidden in this script.

Also, I loathed the gags about Professor Stephen Hawking (Robert Joy). Superhero Movie makes fun of Hawking’s physical handicap by portraying him as a lascivious guy.

That was just going too far. I even got the fistfight between Nelson Mandela, Archbishop Desmond Tutu, the Dalai Lama, and the pope, even though I didn’t understand why the movie even exists.

Written and directed by Craig Mazin