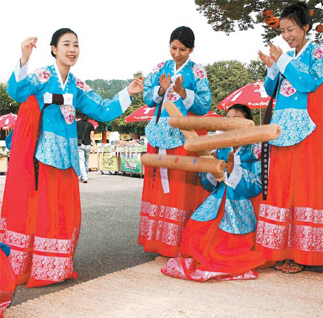 
The Lunar New Year holiday (Jan. 25 to 27) is just a few days away, a time to pay homage to your ancestors and spend quality time with your family. This year the long weekend will be a great way to catch up on some much-needed rest and venture out to sample aspects of traditional Korean culture.

The best places to start are the major royal palaces in Seoul.

“Although people can try and visit all five royal palaces in a day, it’s better to focus on two palaces and go with family or friends,” said Shin Jung-hun of the Korea Tourism Organization.

Gyeongbok Palace, the largest from the Joseon Dynasty, offers a range of traditional folk games and activities, such as seesaw, jaegi (similar to hacky sack), spinning tops, yut (a board game), tightrope walking and tuho, a game in which participants try to chuck wooden sticks into a jar.

The palace grounds are open from 9 a.m. to 6 p.m. Admission is 3,000 won ($2.19) for adults and 1,500 won for students and children. Visitors in hanbok, traditional Korean clothes, get in free. The palace is located near Gyeongbokgung Station, line No. 3.

Another option is the traditional dance performances at Deoksu Palace, central Seoul, and the ongoing exhibition on modern Korean art titled, “Modern Korea Rediscovered” at the National Museum of Art, which is located in the palace. Rare works from the 19th century to the 1960s will be on show, including pieces by Lee Joong-seob, Park Su-geun and Kim Hwan-ki.

The National Museum of Korea will host a series of activities and performances from Jan. 26 to 27.

From 11 a.m. to 5 p.m., visitors can ask to have a family code of ethics written in Chinese characters and also write their own goodwill messages and hang them from trees.

From 1 p.m. to 5 p.m., there will be 15-minute segments of pungmul nori, a traditional musical performance.