For long life and good health

For long life and good health 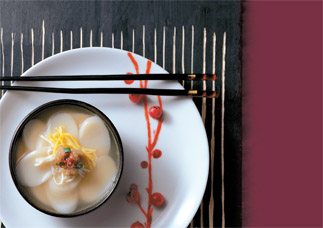 If you’re ever curious about someone’s age in Korea, there is a polite way to find out: You simply ask, “How many bowls of tteokguk have you eaten?”

Tteokguk, or rice cake soup, is an iconic dish here for Lunar New Year, or Seollal, but not many Koreans know the origins and history.

The tradition of eating tteokguk began as a way of wishing people a long and healthy year. This longevity is symbolized by the elongated shape of the rice cake before it’s sliced into bite-size pieces. The shape of each slice was made to resemble the size of coins, a symbol for money and fortune.

Under the Japanese regime in Korea (1910-1945), the colonial government forced Koreans to celebrate Jan. 1 as the official day for Seollal. It wanted to disrupt the indigenous Lunar New Year holiday.

Even then, most Koreans cynically referred to Jan. 1 as “the Japanese Seollal” or the “bureaucrats’ Seollal” as a form of resistance against the colonial government. In 1995, the government designated Lunar New Year as the official Seollal, and made it a three-day holiday.

On Lunar New Year it’s a tradition to get up early, get dressed in new clothes and hold ancestral worship ceremonies. Once this is through, the children bow to elders in the family.

Experts note, however, that tteokguk was considered fast food in the old days, because the soup was filling and you could serve the dish all at once. It was seen as a way of stressing a sense of unity and ethnic connection.

Tteokguk in the past looked different to what we eat today. Many homes make a broth out of simmered brisket and beef bones today. In the past people boiled chicken or pheasant meat for broth. The meat topping shifted from stir-fried beef to slices of broiled beef. These days cooks also like to sprinkle sesame seeds or dried seaweed for added seasoning.

Traditionally, families used to make their own rice cakes. They steamed rice powder in a pot and then pounded the dough in a mortar and pestle.

Once the cakes harden, you slice them with a knife. Nowadays you can use different sized tubes connected to a cutting machine to make a variety of shapes for different purposes.

Rice cakes are used in many kinds of dishes over Lunar New Year. They’re skewered on a stick with marinated beef and can be eaten as a dessert mixed with honey.

Seollal is usually the season to sample a wealth of traditional Korean food including dumpling soup, rice biscuits, patties, cinnamon punch and different kinds of side dishes.

Normally, certain dishes match better with others. Rice cake and dumpling soup are typically served with cabbage kimchi, assorted patties and steamed beef followed by a cinnamon punch for dessert. Alcoholic drinks are matched with patties, skewers, beef sashimi and japchae, or glass noodles. For guests who don’t drink, punch and rice cake are served with traditional toffee.