With rice cakes, it’s all about presentation

With rice cakes, it’s all about presentation 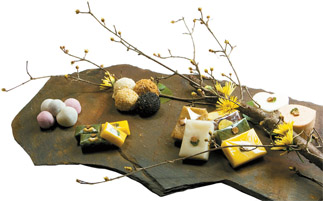 Ahn Jeong-hyun is considered a guru of traditional confectionery in Korea.

Her work inspires people with a sense of wit and originality.

Ahn originally made a name for herself as the owner of a restaurant and shop that specializes in gifts and food for traditional Korean weddings and holidays.

But aside from the taste and originality of the recipes, her work is known for an artful presentation adorned with items inspired from nature.

“I can spend hours in a flower market these days,” she says. “I can picture how my work is going to turn out just by seeing a small flower or a twig.”
Most people think of winter as the grave of natural life.
Ahn doesn’t agree.

She believes the most dynamic season in the flower market will be from now until early February.
A few petals and branches would help to create a beautiful rice cake dish, she adds.

“The focus of the dish used to be on the rice cakes,” she says. “Just think of it as you’re working on a traditional Korean painting. The virtue of Korean painting is the line and empty space. The rest is easy.”

Ahn is an experienced chef in this field, known for meticulously picking every detail, from the shape of a gift box to the color of bojagi, the wrapping cloth.

Talk about her gifts quickly spread through word of mouth among brides-to-be and their families who typically prepare paebaek, a traditional ceremony that takes place after a Western-style wedding.

Every gift is accompanied by a memo containing instructions as to how the food should be preserved and ways to best enjoy the dish.

Her efforts evoke a sense of warmth that her competitors miss.

Ahn’s idea for serving a tasteful rice cake dish is simple: Use the empty space on a plate so that the flowers and rice cake won’t cling to each other.

She rolls her yaksik, sweet rice mixed with dates and chestnuts, as if she was making gimbab, rice rolls, and matches them with a piece of barley.

She assembles different kinds of rice cakes into the colorful shape of a flower to stress a sense of volume.

And she accentuates the colors of each ingredient by mixing and matching with assorted chestnuts, dates and pine nuts on one dish, with a sprig from a tree as an added adornment.

In another dish, she uses the contrast of natural pigments by placing together cake made with pumpkin and mountain herbs.

To make the lines look alive, Ahn asks us to take advantage of organic items like pine tree branches.

A warning: putting the rice cakes too tightly on a plate makes them look too chunky.

“The idea of a family gathering in one place is a special occasion,” she says. “The effort of trying something different is a treat in itself.”

Her last piece of advice is to use a bold plate.

Choose an unusual color and an organic shape to match the flowers and rice cakes.


A five-step guide to making tteok

1. Soak the rice in water for about eight hours. Drain the water and grind and crush the rice finely. Add a pinch of salt. (Alternatively, take the rice to a shop for milling.)

2. Add a few teaspoons of water to the mixture as you add ingredients such as pumpkin, dates and other dried fruits. Strain twice. 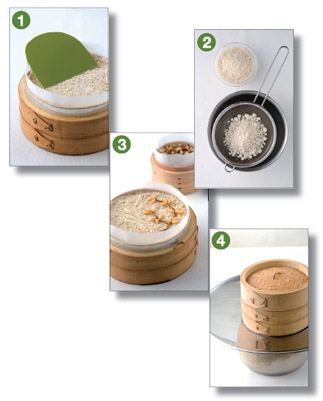 3. Place the dough in cheesecloth and put inside a steamer. Don’t put too much inside, though.

4. Boil water in a pot. When the water comes to a boil, put the steamer over the water. Close the lid. Cook for five to 10 minutes.

5. Store the ground rice that you don’t use in a zip-lock bag and place in the freezer. This will allow the rice to last longer.