Ancestor worship as a full-time job

Ancestor worship as a full-time job 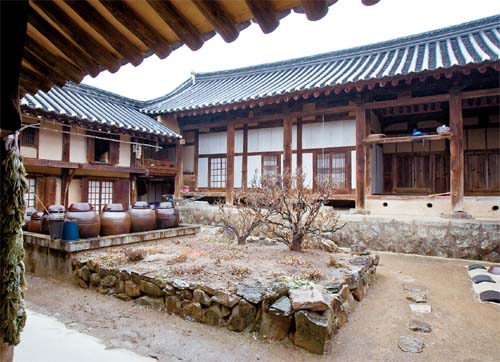 The home of the eldest son of the Seohae Ryu clan in Andong Hahoe Village, North Gyeongsang. By Shin Dong-yeun

Men like Ryu Young-ha are a rarity these days.

As the 14th jongson, which means the eldest male, of the Seohae Ryu family residence, Ryu’s sole function in life is to honor his ancestors in accordance with Confucian rites and customs.

What makes men like Ryu a rarity is that they reside in their forbears’ family home and keep up age-old Confucian customs for honoring the dead.

Ryu, a direct descendant of Seohae Ryu Seong-ryong, a high-ranking political figure from the Joseon Dynasty (1392-1910), equivalent to a prime minister today, conducts more than a dozen.

Some men might look on such responsibilities as a burden, but the 83-year-old Ryu is very proud of his heritage and his role as the elder statesman of the family and chief resident of the jongga, the house where the eldest male of a family officially resides.

“Even if I had a choice, I wouldn’t have it any other way,” said Ryu.

Technically, the eldest sons of all Korean families can take the title jongson, but the word is usually reserved for men from a well-to-do and socially respected family.

“Where would you find a lineage like ours? In the old days, if one was asked, would you rather be a high-ranking provincial official or the eldest male of the Seohae Ryu family, most would choose the latter,” he added. 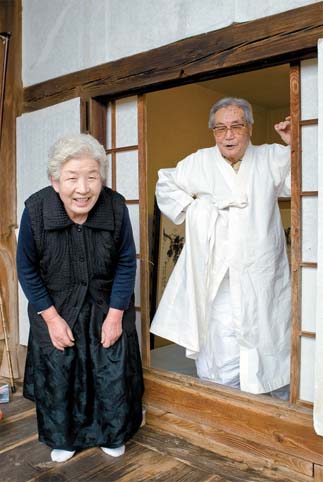 Ryu Young-ha, the 14th jongson, or eldest son, of the Seohae Ryu clan, poses outside his family house with his wife, Choi So-hee.

Before Ryu took up life as the guardian of his family’s name in Hahoe, he was a teacher in Seoul. But after the death of his father, the 13th jongson, Ryu swapped the city for his family roots.

“Just as I took over family duties from my father, the 13th jongson, my eldest son will have to take my place after I am gone,” said Ryu.

But Ryu is an exception.

As Korea has modernized and grown wealthier, other family clans devote less time on the jongga tradition, and the custom could be dying out.

The Seohae Ryu jongga is surviving for three core reasons.

The first is that the family is based in the heart of Andong Hahoe Folk Village, North Gyeongsang, which is designated Important Folklore Material No. 122.

The village is home to cultural treasures dating back hundreds of years.

One of the most precious items stored there is “Jingbirok,” a book containing a contemporary account of the Imjin War (1592-1598) between Korea and Japan. It was written by Ryu Seong-ryong, who sits at the top of the family tree.

You can also find folklore data and tangible and intangible cultural properties in the village, one of the few places left on the peninsula where you can still savor the Confucian spirit of the Joseon Dynasty in an authentic atmosphere.

It’s a drastic contrast to Seoul and its surrounding areas where traditions have dwindled to a minimum. 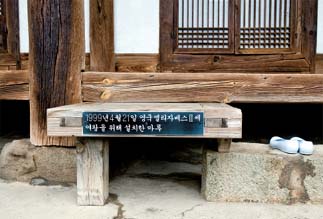 A plaque identifies a wooden por chinstalled for a visit by Britain’s Queen ElizabethII in April 1999.

“Wherever I go in this village, people recognize who I am and my family. That’s part of the privilege of my role. In other regions, this might not ring true, but it’s different here,” said Ryu.

Hahoe Village is a small community and men like Ryu enjoy other privileges because of their position. During family meetings between elder members of the clan, Ryu has the final say on all matters. The respect others pay him is firm.

The second reason for the strength of Ryu’s family is the strong support system within the clan. Other members of the family contribute money to Ryu’s efforts on a regular basis. Without this support, he couldn’t maintain his duties.

So every time an ancestral rite is carried out, the Ryu relatives contribute toward the overall expense. When it’s time to pay respect to Seohae Ryu Seong-ryong, the founding member of the clan, the sums donated are not insubstantial. Last year, the total came to over 3 million won ($2,190).

“In the past, the economic power of the family stemmed from real estate, but drastic land reforms have had a huge impact. Jongson like I are left with many responsibilities and less authority, leaving the whole custom on shaky grounds,” said Ryu, explaining why the financial support of others is so vital.

But voluntary contributions alone are not enough to sustain a jongga. There is a limit to how much can be collected and no one can be sure how much will be collected next time.

To combat economic instability, Ryu and his family use their jongga as a source of income by attracting tourists, the third reason for their ongoing survival.

Since 1994, when the Ryu residence became an official tourist attraction through Andong City’s Hahoe Village Preservation Center, an estimated 10 million tourists have visited the jongga.

The current admission fee is 2,000 won for adults, and past visitors have included Britain’s Queen Elizabeth II in 1999 and former U.S. president George W. Bush in 2005.

Although support from the preservation center lightens the economic burden, it doesn’t solve Ryu’s problems.

He must still fund 13 ancestral rites per year. In keeping with an ancient Chinese book called “Jujagarae” about domestic Confucian customs, Ryu and other members of the clan must conduct ceremonies honoring the last four male heads and their wives.

In addition to Chuseok and Lunar New Year, which are very important dates, the family also pays annual tributes to Seohae Ryu Seong-ryong, the founder of the residence, at an ancestral shrine.

While Ryu organizes such rites, his wife, or jongbu, prepares the vast amount of food for the guests.

Ryu’s wife, Choi So-hee, 80, hires help for these special occasions, but she is responsible for overall food preparation, making her life just as tough as her husband’s.

Whereas Ryu is destined to the life he leads and the responsibilities he must carry out, Choi chose her fate through marriage.

The question remains, though, how many young women today are willing to sacrifice so much and marry into a jongga.

Korean society has undergone a rapid phase of industrialization and the fabric of society has changed dramatically.

Are women prepared to make the kinds of sacrifices that Choi makes?

“Although it wasn’t hard for my son to find a wife, I’m concerned about my grandson,” said Ryu, looking to the future, not knowing whether the family traditions will survive into the next generation.

Choi married into her role within the Ryu jongga in 1972, and her husband sometimes teases her with the same question: If she could start over, would she do it any other way?

“If I had a choice, I would want to be the head of the Ryu clan,” said Choi.