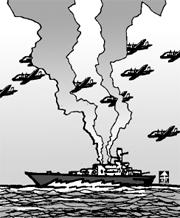 Is there a unit for measuring beauty?

In Western culture, Helen, the wife of King Menelaus of Sparta in Homer’s epic “The Iliad” is used as a yardstick.

Helen’s beauty was so overwhelming that Paris of Troy abducted her, igniting the Trojan War as the Greeks fought to bring her back home.

Helen’s was the face that famously launched 1,000 ships.

The idea of a war breaking out over a beautiful woman isn’t unfamiliar to Asians.

In the novel “The Romance of the Three Kingdoms,” the military strategist Zhuge Liang tricks statesman Zhou Yu into thinking that his enemy Cao Cao attacked Eastern Wu to kidnap the Two Qiaos, who were famed for their beauty. Da Qiao was the wife of Emperor Wu Sun Quan’s elder brother, and Xiao Qiao was the wife of Zhou Yu.

Film director John Woo has created a two-part movie called “Red Cliff” based on this story. The first part of this historic epic was released last summer; the second installment opened Thursday.

Cao Cao and Zhou Yu are pitted against each other over Xiao Qiao in Woo’s film, just as Achilles fought Hector because of the war that began over Helen’s abduction.

Xiao Qiao, who never breathes a word in the novel, flits between both camps and has a hand in who will win victory and who will be defeated. Amid the melodrama, warriors spill their blood for the honor of their people.

Since the film is targeting a global audience that probably doesn’t know much about the original novel, the plot has been romanticized to help Westerners better understand the context of ancient China.

However, East Asians might long for the flavor of the original work, having grown up in the shadow of its cultural influence.

Of course, films based on a famous story are likely to be subject to such criticism.

When the 1956 Audrey Hepburn film “War and Peace” premiered, American critics said, “The only person who read the novel was Henry Fonda.”

In fact, such controversies represent audience interest, which is exciting for both the book and the film. But what worries me most is that the impact of the original work might disappear.

When the 2004 film “Troy” came out, there were many complaints from netizens about the fact that the death of Achilles had been revealed in the preview, although of course if they had read the book they would have already known about it.

An era in which the classics disappear has begun.

The writer is an entertainment news editor of the JES.