A fashion show featuring Australian fashion brands was one of the highlights of Australia Day 2009 last Wednesday at Grand Hyatt Seoul. By Oh Sang-min

Images of kangaroos, wallabies and vast stretches of wilderness spring to mind whenever Australia crops up in conversation.

But Australia Day 2009 at the Grand Hyatt Hotel last Wednesday proved that’s not even half the story.

The evening featured food, wine, art and music, flowers and fashion, leisure and sports under the theme “Colours of Australia.”

The event was aimed at giving people a taste of Australia’s diverse culture and celebrating the country’s national day. 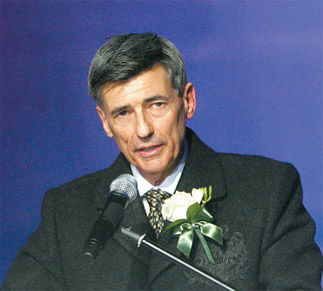 Officially, Jan. 26 is Australia Day, but the Australian Embassy decided to bring the date forward to avoid a clash with Lunar New Year’s Day, one of the biggest holidays in Korea.

“It is an opportunity for everyone to get a real sense of Australia and our way of life, and furthermore, this is a foretaste of the holiday season [in Korea],” he added.

The Grand Ballroom and Regency Room on the ground floor of the Grand Hyatt Hotel were opened up to provide space for the large-scale event.

There were performances by Australian singers from “Latt Children’s Theatre” and dancers from “Buzz Dance Theatre.”

An exhibition featuring Aboriginal artworks by indigenous Australian artists was well received. Tables were laden with food and wine, showcasing the best Australia has to offer. A stand for GM Daewoo’s new luxury limo “Veritas”, a vehicle wholly made in Australia, sat beside a simulated golf experience offered by Le Meilleur Horizons Golf Resort.

The highlight of the evening was a fashion show. Making appearances were Australian iconic fashion brands affiliated with the Australian Wool Innovation Limited, AWI, such as Billabong, Kirrily Johnston, Helen Kaminski, Sabatini White and Gina Kim.

These businesses have been recently launched in Korea or are seeking Korean business partnership.

They were introduced by models and some of the cast of the popular KBS-TV show “Minyeodeuleui-suda,” which is awkwardly translated as “Chatting Beauties.”

“Since I currently work for the Australian Trade Commission in Korea, I was engaged in preparing for this fashion show,” said Kirsty Reynolds, an Australian member of the cast who was Master of Ceremonies for the fashion show.

“I’m thrilled to see my friends modeling on the catwalk,” she added.

The event also served as an opportunity for the Australian ambassador to make his farewells to Korean friends. He is winding up his service here and will leave Korea at the end of February.

“It’s been a very eventful three years here. We’ve made great progress towards a free trade agreement and enhanced our political and security cooperation, heading into the future,” Rowe said.

Korea and Australia are poised to launch negotiations for an FTA this year.

The ambassador also noted the significance of the relationship between Australia and Korea.

According to data provided by the Australian Embassy, Korea is Australia’s third-largest export destination, with two-way trade worth more than $16 billion in 2007-2008.

Australia is Korea’s major supplier of resources such as coal, iron ore, aluminum ore, zinc ore as well as beef.

And the trading partnership between Australia and Korea is exceptionally complementary, the ambassador said.

“We feel it very important to make this celebration tonight worthy of our relationship. We tried to make this [event] a large-scale production to show you some of the best of what Australia has to offer,” the outgoing diplomat said.

The Australian Chamber of Commerce in Korea, AustCham, was also unveiled during the event. This signals a new chapter in Australia-Korea relations.

The Australian and New Zealand Chamber of Commerce in Korea, or ANZCCK, was disbanded last October, enabling Australia and New Zealand to offer concentrated support to companies trading with Korea via AustCham and the Kiwi Chamber, respectively.