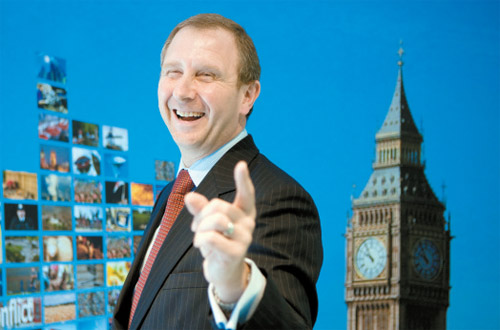 The global economy is on the slide but that hasn’t dented Tony Collingridge’s optimism for U.K. trade.

Collingridge was on a visit to Korea last week for his regular business trip once or twice a year to countries that UK Trade and Investment is doing business with in the Asia Pacific region.

“I have two key roles. One is to help British companies that are already in Asia do more business in the wider Asia region and the other, which is major, is to encourage companies in the region to invest into the U.K.,” Collingridge said.

UK Trade and Investment, the trade investment promotion agency under the British government, supports U.K.-based businesses in international markets while encouraging overseas companies to invest in the U.K.

“Asia is the most exciting region in the world economically as economic growth in the region is just phenomenal and unparalleled by anywhere else in the world - it is a huge magnet for British companies that are very keen to come to Asia,” he added.

According to Collingridge, the U.K. government has encouraged foreign investment longer than many other countries in the world. It set up the Invest in Britain Bureau as early as in 1977.

“The organization at that time was mainly focused on Japanese investment. However, over the years since then, it has grown to cover about 33 countries around the world, including many other Asian countries, including Korea, while its name has been changed to UK Trade and Investment in the meantime,” Collingridge said.

The organization’s performance last year proves how far it has come.

The number of investments in which the Asia Pacific Regional Team for UK Trade and Investment is involved over a year rose to 415 in 2008 from about 30 in 1998.

London, the capital of the country, is a truly global business center with about 300 different languages spoken in the city and one in two of the working population in London born outside the city, according to Collingridge.

The British businessman didn’t forget to mention substantial business opportunities in the U.K. associated with the London 2012 Olympic Games.

For companies looking for unique business opportunities related to the London 2012 Olympics, UK Trade and Investment has launched the Web site (www.competefor.com) where companies can register to be advised of contracts that are coming through.

“LG relocated its European product design center last year from Milan to London, while Samsung registered more patents in the U.K. than any other company,” he said.