Is the world ready for Korean cuisine?

Is the world ready for Korean cuisine? 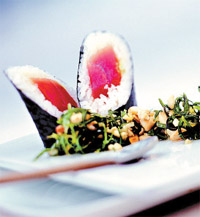 And it’s not just kimchi. In an e-mail interview with the JoongAng Ilbo, Bittman said he has even tried his hand at Korean hot pot, barbecue and side dishes.

This is not a recent infatuation. This is a long-standing relationship. As far back as 1996, Bittman wrote about Korean food in lofty terms.

“Super-high flavor, no fat, [and] lots of varieties that go with almost everything” he wrote in a story for his newspaper. “I can understand why people eat [Korean food] daily,” he admitted.

Melissa Clark, another food writer, shared her experience of making pork chop with kimchi in a recent e-mail interview with the JoongAng Ilbo. In an experience which later became material for one of her columns, Clark added butter, honey and dry vermouth to the chop, a dish that got her husband to say, “I’d like to have kimchi everyday in the refrigerator.”

Clark, a keen fan of bibimbap, cooked rice with mixed vegetables and meat, said, “I’m sure there is more to Korean food than what’s currently available [in the U.S.].”

Moving to the other side of the planet, Osama El-Sayed is a TV chef who runs a well-received show called “It’s More Delicious With Osama” on state-run Dubai TV.

During a recent visit to Korea, El-Sayed told the JoongAng Ilbo that many Arabian gourmets are “smitten with the taste of Korea.”

So, the question is, is the world ready for Korean food?

Thailand and Japan have already penetrated deep into the global food market. Just look at the New Yorkers and Parisiennes waiting in line outside chic sushi restaurants.

Korean cuisine has not reached the same level of recognition, but is it getting any closer?

Breaking free from the rah-rah stance about how healthy kimchi is, the JoongAng Ilbo and its sister paper the JoongAng Daily, are investigating the problems Korean food faces as it tries to go global.

The Ministry for Food, Agriculture, Forestry and Fisheries estimates the world food industry market to be worth 4,800 trillion won ($3.5 trillion), proving it to be a market of great potential.

According to the U.S. Agricultural Marketing Resource Center (www.agmrc.org), the American ethnic food market rounds out to about $75 billion.

Indeed, the number one reason for foreign tourists to fly to Korea is neither an old royal palace nor the natural landscape. 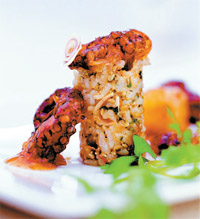 According to a 2007 survey by the Corea Image Communication Institute of foreign opinion leaders, 49.2 percent of respondents said their number one reason to visit Korea is to “taste Korean food.”

In a 2006 survey by the Korean Tourism Organization, tourists said their shopping priority in Korea was food (kimchi excluded, 36.6 percent), followed by fashion items (26 percent) and kimchi (24.7 percent).

But the Korean government has been slow to take advantage of this marketing opportunity, unlike the Thais and Japanese.

The Thai government concentrates its globalization of Thai food drive under a separate division called “Kitchen of the World,” with hearty support from the Thai royal family.

The leader of the division, which falls under the government’s foreign office, told the JoongAng Ilbo that the number of Thai restaurants around the world leaped from 5,500 in the year 2000 to 11,000 last year. 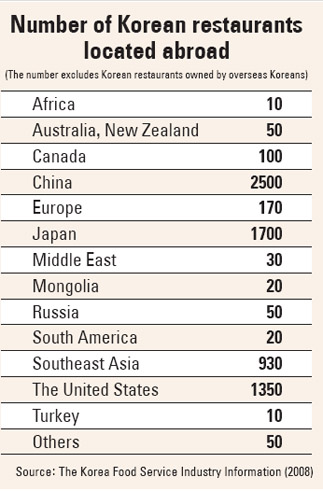 Meanwhile, Korea’s food exports showed only moderate growth, from $4.29 billion to $6.32 billion in the period.

Japanese food, meanwhile, is already a worldwide phenomenon. In a 2008 Zagat survey, seven out of 25 top restaurants are Japanese, such as New York’s Nobu and Sushi Yasuda.

On the flip side for Korea, there’s plenty of room for growth. “Now is the time to enhance the class of Korean food and to reach out to the world,” said Cho Tae-kwon, chief executive officer of the chinaware company Kwang Ju Yo. Choi, who recently closed his ambitious Korean restaurant Gaon, said food could be a new market to rival Korea’s semiconductor and cell phone industries.

Yang Hyang-ja, leader of the World Food Center, agreed. “There is a growing world trend to cut down on Western-style dining focused on meat and to look for a healthy diet, and that’s the place Korea should find a home.”

The Korean government is well aware of the need. Last October, the Ministry for Food, Agriculture, Forestry and Fisheries initiated the globalization of Korean food with a plan to increase the number of Korean restaurants overseas from 10,000 to 40,000 by 2017.

The government also pledged to build a list of 100 prestigious Korean restaurants around the world, with the role model being the posh Japanese restaurant Masa in New York, where diners fork out $500 a head for the experience.

Before it gets started, the government might consider looking at Korean restaurateurs who have already hit the big time in places like Vienna and Paris under their own steam. A lot could be learned from their endeavors.