Many would agree that art should not be a privilege simply for the elite.

In this spirit, all should have easy access to artwork that is different in style, form and idea.

To provide many more occasions of artful joy, Die Galerie, a large-scale gallery in Germany, is opening a branch in Cheongdam-dong, southern Seoul, next Friday.

Die Galerie opened in 1979 in Frankfurt. It currently has branches in Italy, the United States, Spain and now, Korea.

To celebrate its opening, the gallery is holding an exhibition titled, “German Figurative Art.” It will display some 30 paintings and sculptures by 16 contemporary German artists including abstract artist Gerhard Richter, former East German artist Georg Baselitz and Werner Buttner.

“German art after World War II stresses a variety of images, ideas and concepts from the real world,” said Kim Ha-rin, one of the organizers at the gallery.

The paintings by former East German painter Volker Stelzmann, for example, reflect emotionless and expressionless individuals from the working class who suffer in vain.

One of his oil paintings titled, “Annunciation” (2006), which will be displayed at the gallery, portray awkward individuals in a grim scene of urban isolation. Each figure stares in a different direction and seems locked in a trance. “The artist emphasizes the loneliness and solitude of the individual in society,” Kim said. 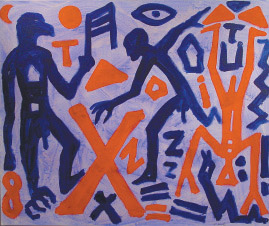