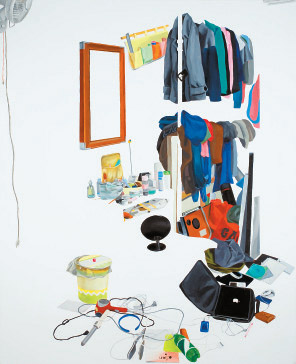 “Nothingness” by Choi Bo-bae, a senior in the B.F.A. program at Hongik University. Provided by the organizer

Some football and basketball fans tend to prefer collegiate sports over professional sports.

Although the skills and the detailed touch of amateurs pale in comparison to professionals, their love and passion for the sport is often unmatched.

The same can be said about the first exhibition of the year for doArt Seoul, “Class of 2009.”

It is customary for art students to prepare their graduation exhibition during their senior year.

These graduation exhibitions allow artists to showcase their skills before an audience for the first time.

It is also considered an important stepping stone for young artists as they begin to prepare for a career in art.

Borrowing from that theme, doArt Seoul has various artworks from 15 senior art students on display.

The graduation exhibition artworks were chosen by doArt after a thorough review and judging process.

For a select few senior students, their paintings are graduation exhibit artworks that conclude their postsecondary education and also debut works.

“DoArt has always tried to provide space for innovative and promising young artists. The current exhibition is no different from that point of view. We organized this exhibition under a fun concept to discover and introduce young and promising artists,” said Sung Eun-jin of doArt Seoul’s PR team.

The artists range in age from 23 to 28 years old and although the technical aspects of these paintings are not as polished as those of seasoned veterans, the works are impressive for young artists making their debut.

According to doArt, Gil Yang-suk’s “Supermarket,” an oil on canvas of the wine section, is based on the artist’s fond memories of a neighborhood supermarket.

Choi Bo-bae’s “Nothingness” attempts to reveal the desire to fill a void by presenting an all too familiar, messy interior of a room on a crisp white background.

There are more works by 13 other young artists.

For those familiar with doArt Seoul, it has moved from its previous space near Gyeongbok Palace in northern Seoul to the third floor of Gallery Hyundai Gangnam Space near Apgujeong Station, southern Seoul.

“Class of 2009” is being held thru Feb. 22 at doArt Seoul on the third floor of Gallery Hyundai Gangnam Space near Apgujeong Station, line No. 3, exit no. 2.