Art, heart and an eye for innovation

Art, heart and an eye for innovation 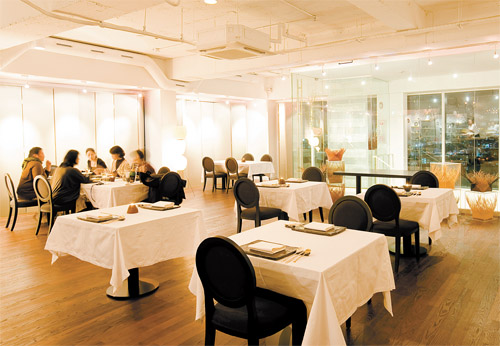 Poom Seoul, a Korean restaurant jointly designed by a food stylist, a chef and a designer, serves a traditional meal in a contemporary setting.[JoongAng Ilbo]

Among local epicureans, Jo Tae-gwon, the chairman of Korean ceramic manufacturer KwangJuYo, is considered a missionary for globalizing Korean cuisine. His guiding rule is that to promote Korean food, you have to also promote Korean culture.

For a dinner banquet he hosted in a Napa Valley reserve two years ago, Jo had sent over from Korea a complete set of traditional tableware, including porcelain and ceramic plates, a handwoven tablecloth and cutlery delivered to accompany a specially prepared meal for a select group of guests.

“Globalizing Korean food is about reviving Korean cultural values,” Jo says. “The strength of this country has weakened because we failed to recognize the excellence of our food.”

Jo is not the only person to stress the importance of Korean craftsmanship in a bid to globalize Korean food. More Korean restaurants are opening here to better package the artistic aspects of the local culture that have influenced the cuisine.

A case in point is Uriga (02-3442-2288), a restaurant that Ahn Jeong-hyun, a chef who specializes in traditional food for weddings, opened in Cheongdam-dong, southern Seoul.

The name of the restaurant means “food art we enjoy.”

For every dish served, the restaurant lays a thin spread of calligraphy paper over the tables to hold the food, and Ahn uses traditional roof tiles, dark pebbles and pale ceramic panels instead of bland plates, which he then decorates with eclectically arranged branches and petals.

“We live in an age where everything is packaged to meet the sensibility of savvy design, but it’s sad to see the culture of Korean restaurants staying the same,” Ahn says.

The tables and chairs, which were designed by a local firm, are made from dark wood, which helps to sustain a modern and authentic atmosphere, one that is further emphasized by the elaborate embroidery and mulberry paper that adorns the booths.

Cheonji Ilga (02-511-0199), a Korean restaurant in southern Seoul’s Nonhyeon-dong, is built inside a hanok, or traditional Korean home. The architecture was inspired by a Confucian school in Andong. As you pass under the sloping roofs, you’re met by a hall with a high ceiling. The walls are made of mulberry paper and the tables, while a tad bland, are fixed on pedestals, just like traditional Korean furniture. 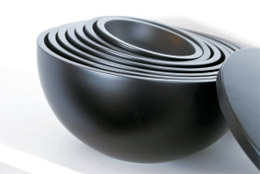 On the second floor there are separate booths inspired by traditional pavilions. Some rooms have under-floor heating and the pavilions are supported by wooden columns.

“The menu is made up of 12 dishes representing regional products based on seasonal ingredients,” says Kang Young-su, the restaurant’s chef. “It’s designed to offer the experience of enjoying Korean food in a proper environment where you can really get a flavor of Korean culture.” 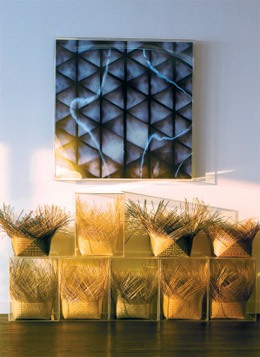 The interior at Poom Seoul.

The food is telling. Fresh ginseng is thinly sliced, seasoned and arranged around the edges of a plate like flower petals. Fermented skate fish is served in the plate’s center circled by kimchi and steamed pork.

Other restaurants have a more musical flavor. In Insa-dong, central Seoul, Gogung (02-736-3211), which specializes in bibimbap, mixed rice with vegetables, offers a daily performance every evening for an hour. The idea is to bring together Korean food and gugak, traditional music from Jeonju, the home of bibimbap, and gugak.

In December, a group of Korean trend-setters, including a food stylist, a chef specializing in royal cuisine and a designer, opened Poom Seoul (02-777-9007) on Mount Namsan. The restaurant is ambitiously aimed at creating a new style of Korean food, and the owners are planning to open branches in L.A., Paris, Tokyo and Beijing.

The restaurant uses tableware that illustrates the meticulous craftsmanship of Korean art. The idea is to serve Korean art, literally, on a plate.

The menu at Poom is based on seasonal ingredients in homemade style, but it also includes dishes that add a contemporary flair. That means serving fusion dishes like grilled pine mushrooms in the autumn and a starch-coated croaker in the summer.

But not everyone thinks Korean food promoters are heading in the right direction.

“Koreans have done a poor job in promoting their culture,” says Andrew Salmon, the author of “Seoul Food Finder,” a guide to restaurants in the capital. “The country should invite food writers from around the world, take them to cooking schools in Korea and let them play with the ingredients.”

Salmon criticizes government campaigns to promote Korean food among the bureaucrats, blaming the lack of creativity. “They’re trained as administrators, not marketers. They have to get somebody who has an internal mindset,” he adds.

But the trend for Korean food is already on the move outside of Korea. Food critics rave about upscale Korean restaurants including Moim, a new establishment in Brooklyn, New York, which has an urban setting. In Europe as well, critics are eyeing up humble Korean restaurants like Sobanne, which opened in April in Montmartre, Paris.

Major French newspapers including Le Figaro covered the place in their food section. The restaurant, which has 24 seats, is based on a course meal set, unlike the grill-it-yourself barbecue joints that are popular here.

“French people enjoy long meals and long conversation,” says Kim Jeong-gyu, the owner of Sobanne. “If you serve everyone at once the food gets cold too quickly.”

Kim graduated from a hotel school in Korea and worked here before moving to Paris three years ago. He opened the restaurant last year after carefully studying French dining style.

A lunch set at Sobanne ranges from 20 euros ($26) to 32 euros a head, and 32 euros to 52 euros for dinner. That’s relatively expensive compared to other casual French dining options, but the restaurant is full of local customers who want to get a peek at this novelty Asian cuisine. No seat was available in the restaurant during a recent lunch, and all of the customers were French.

“The idea is to make Korean food and culture come alive as much as possible, but to serve it in a French style,” says Kim.

Marinated beef tartar is served with green leaves to contrast with the red meat and sprinkles of balsamic vinegar and brown mustard. Other dishes like grilled ribs contain the original flavor of back home, but the plates are traditional ceramics imported from Korea.

The secret to this Parisian restaurant is that it uses the best seasonal ingredients. The vegetables are imported from a mountainous village in South Jeolla Province. Green tea is selected among the best products from Boseong, South Jeolla, the home of Korean green tea.

Kim’s next dream is to be included in the Michelin guide. “It will be very difficult, but it won’t be impossible if I keep using the best ingredients and serve them well,” he says.

Experts claim that the potential for Korean food is endless if it is tailored to suit the taste and dining style of people overseas.