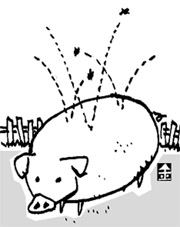 News surfaced recently that bedbugs have reappeared in Seoul for the first time in more than 20 years. Quarantine officials suspect they were carried in by international travelers.

Bedbugs are parasites that live solely off the blood of humans and other warm-blooded mammals. But like many pests, bedbugs can be as helpful as they are harmful.

The following story finds three bedbugs fighting over a hog. As they were quarrelling and haggling to get hold of the juiciest part of their meal, another bedbug stumbled upon the scene and asked what they were fighting about.

The three glared at the stranger, growling, “We are fighting for the best spot. What do you want?”

The passing bug turned serious and threw back another question at the greedy bugs. “Don’t you know it will soon be the season for humans to pay respects to their ancestors?”

The brawling pests looked puzzled and waited for further explanation from this bug-eyed all-knowing newcomer. “When humans pay respect to their ancestors, they will cook the pig before laying it on the table.”

The three finally grasped the situation: Not only would their dinner soon be gone, but in the midst of feasting on the hog, they would be burned.

Humbled, the three bedbugs heeded the advice of their wise friend, and began to cooperate. Sharing the pig, they worked together to laboriously attack the hog’s flesh. As a result, the animal was in no condition to be served up on the dinner table.

The pig lived and so did the parasites.

This story appears in “Han Feizi,” written by the famous ancient Chinese philosopher Han Fei during the Warring States Period.

The bugs serve as a parable of society. Individuals of a community frequently quarrel and clash to attain the best of life.

But as in the parable, individuals need to look beyond their immediate differences and interests in order for their community to survive and thrive. When blinded by self-interest and greed, few can see the bigger picture and in society, this can often result in destruction.

Some politicians are attempting to use the recent tragedy over redevelopment in Yongsan, central Seoul, where five protesters died in a violent clash with the riot police, for political purposes.

Opposition parties are demanding accountability from the newly appointed national police chief for making hasty and drastic orders to disperse the protest.

Those misusing the tragic incident for political gain should learn from the parable of the bedbugs and the hog.

They should stop thinking what they can gain and instead, concentrate on how the entire community can benefit during these tough economic times.