[Review]Bleak, joyless tragedy of doughy worth

[Review]Bleak, joyless tragedy of doughy worth 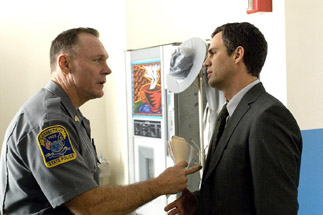 Dwight Arno (Mark Ruffalo, right) resolves to turn himself in to a police sergeant (Antoni Corone, left) but fails to do so at the last moment. [MovieWeb]

In prior reviews, including last week’s for “Changeling,” I’ve voiced my distaste for ridiculous coincidences within a film’s plot.

This is why I hated the saccharine romantic comedy “Serendipity” despite my crush on John Cusack, and why I thought the childhood rapist-turned-Taliban warlord in “The Kite Runner” was a gratingly obvious villain.

“Reservation Road,” a new release this week, is a movie that hinges on a string of such twists of fate.

The film - based on a novel, but not to be confused with the coming “Revolutionary Road” starring Leonardo Di Caprio and Kate Winslet - is another victim of such contrived coincidences.

When a hit-and-run accident claims the life of young Josh Learner, parents Ethan and Grace Learner (a doughy Joaquin Phoenix and the lovely Jennifer Connelly) are distraught at the police’s inability to track down their son’s killer.

Going by the advice of an Internet support group (which should never really be any sane adult’s course of action), Ethan decides to hire a lawyer to put pressure on the police investigation.

And who else is the lawyer but Josh’s killer, Dwight Arno (an even doughier Mark Ruffalo)?

Writers John Burnham Schwartz and Terry George heighten this artificially created tension - especially for a film so firmly set in reality - by penning lines for Phoenix like “We’re going to hunt that guy down,” in conversations with Ruffalo.

The “small world” factor is the vehicle the writers seek to manipulate as Phoenix’s Ethan works to uncover the truth.

The film is a tragedy in its truest sense, in that Ruffalo as Dwight creates his own misery.

He doesn’t stop driving after knowingly hitting Josh because he’s on the verge of losing visitation rights with his son.

He tries to turn himself in, only to have cowardice strike at the last minute. Then there’s Ethan’s obsession over finding his son’s killer, a descent that begins to isolate him from his grieving family.

But aside from being overwhelmingly sad - like when Ethan, Grace and Emma must drive away from Josh’s body cordoned off at the crime scene - Reservation Road fails to elicit emotion.

Jennifer Connelly does some sorrowful sobbing, but without anyone else to back her up, the performance falls flat.

The male leads are problematic, as Ruffalo is a miserable wretch and Phoenix suffers from overweening wrath.

Assuming that the reverse is true, then audiences have only the briefest flickers of happiness to contrast with the pervasive bleakness of an overwrought, joyless film.