Making tracks on a luxury train

Making tracks on a luxury train 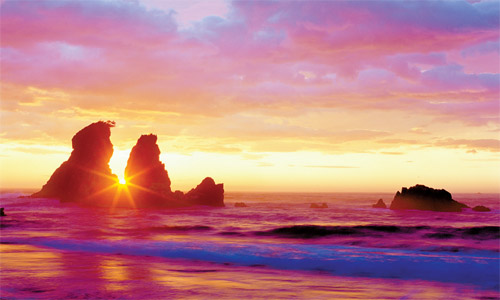 A view of the sunrise at Chuam Beach in Donghae, Gangwon. [JoongAng Ilbo]

We’re two hours out of Gyeongju, and Haerang, Korea’s first sleeper train, was shuttling through the darkened North Gyeongsang countryside.

The engine was louder and more distracting than I expected; curled up in my bunk, I found it hard to drift off to sleep.

During dinner, I asked one of the train attendants from Korail, the state-run railroad operator, whether other passengers ever complained about the noise.

“You shouldn’t have a problem falling asleep on this train if you walk around a lot during the day,” said the guard, “and drink a few glasses of wine before you go to bed.”

From Gyeongju, the train runs all night, arriving in Chuam Station, Gangwon, on the eastern coast of the Korean Peninsula at 6 a.m.

This is where passengers hop off to stretch their legs and catch the scenic sunrise. It’s a famous spot often featured at the end of the day’s programming when TV stations play the national anthem.

Normally, it takes about three hours to get from Gyeongju to Chuam. It would take even less time on the KTX bullet train, although no direct route is currently available between those cities.

But the sleeper train runs slower. It was remodeled on the Mugunghwa, one of the oldest, and cheapest, trains in the country.

Due to the cheaper fares, mostly senior citizens and soldiers ride this train.

For Haerang, anyway, the slow engine fulfills a purpose: to stretch out the journey from one city to another in order to make an overnight package tour.

The journey from Gyeongju to Chuam is part of a three-day “rail cruise,” a luxury train package that Korail has ambitiously modeled after the Blue Train, a luxury rail experience that cuts through the heart of South Africa.

The trip works rather like a sea cruise. Each day passengers are dropped in major cities across the country and a local guide picks them up at the station and takes them sightseeing. After the tour, the passengers board the train and head to the next destination.

The first stop on Day 1 of our trip was Mokpo, a port city in South Jeolla. After a ferry tour around the bay and a browse through a seafood market in Tongyeong, South Gyeongsang, we headed to Gyeongju, the capital of the Silla Kingdom and the highlight of the trip.

After a traditional Korean meal, we were taken around the city’s major historic sites, which were beautifully illuminated for a moonlit tour.

The route began in Anapji Pond, a part of old Silla’s palatial complex that includes a water garden, and continued on to Cheomseongdae, an observatory built during the reign of Queen Seondeok, and the 2,000 year-old royal tombs.

Anapji at night offers a tranquil stroll for lovers walking arm in arm. It’s divided into three small islands and surrounded by a lush forest, which creates the perfect ambiance for a quiet summer night walk. The original palace was destroyed by the Mongolian army during an invasion of Gyeongju in 1238, and it was rebuilt in 1974. 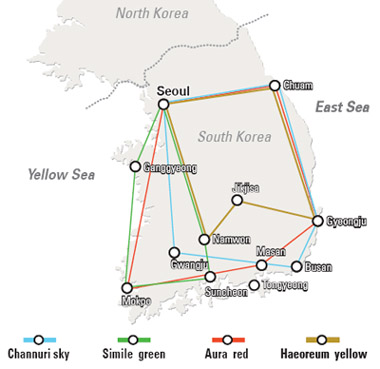 Back on the train later in the evening, a live band set up in the lounge. The audience was mainly middle-aged women, and the concert naturally led to a karaoke party, which continued through midnight.

“This is rather fun,” says Gong Gyeong-ok, a passenger from Seoul accompanied by her girlfriend.

“We originally thought of going somewhere in Southeast Asia or renting a room in a bed and breakfast by a quiet lake, but this is unique as it is.”

The facilities inside Haerang were originally aimed at meeting the standards of a luxury hotel.

Each suite comes with a TV and a private bathroom with bidet, which caused quite a fuss. The rooms, though tiny, are warm enough to walk around in shorts. 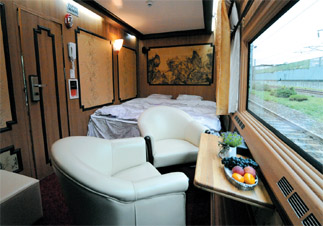 In the dining car, guests can sip free wine and help themselves to a bowl of fruit and biscuits by the counter.

But the suites are not without flaws.

In our room, for instance, the satellite was unstable and the TV images were interrupted every 30 seconds. The private shower was clean, but the water supply limited.

The central heating was so powerful that without a humidifier - luckily available in each suite - you’re likely to wake up in the morning with cracked skin and dried lips.

In theory, Haerang works to meet the needs of tourists visiting Korea with little time but boundless enthusiasm to explore the country.

But Haerang is no South African Blue Train. Korean trains were primarily built for transporting passengers and not for sightseeing.

And even for a hotel-quality suite, the rooms are overpriced for the few services they offer: a king-size bed and two sofas facing the window.

Other things I didn’t appreciate included the state of the decor. In one of the suite rooms, for example, a paper scroll of a traditional Korean painting hanging above the bed was torn and separated from the wall. 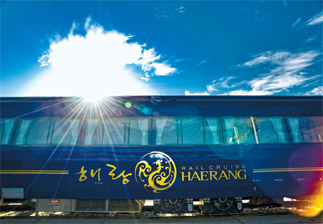 It’s still an adequately furnished room for a sleeper train, but not nearly as convenient as a standard bedroom of a three-star hotel. For this quality, a three-day package in a Haerang suite room, at a cost of 1.2 million won ($876) a person, seems too much.

The family room I stayed in was a little cheaper - 2.9 million won for three people.

Still, it is difficult to imagine how a room with one bunk bed could fit more than two people (the floor would barely sit a baby carriage).

The trip, nevertheless, offers a convenient way to visit the country and experience pleasant moments like the night view outside the train window.

Even if it’s just the flickering signboard of a love motel rushing by, the trip offers tantalizing glimpses of contemporary Korea, during the middle of the night.

Through Feb. 28, Haerang offers a 20 to 25 percent discount for people who want to celebrate birthdays, wedding anniversaries or a child’s admission to university.

Korail offers four package tours. “Haeoreum,” a two-day route, stops at Jikji Temple, Gyeongju, Chuam and then returns to Seoul. “Simile,” another two-day tour, heads to Mokpo for a ferry ride, stops at Suncheon for sightseeing, and then heads to Namwon, the home of Chunhyang, the heroine of a popular folk tale. “Channuri,” a three-day tour, takes in Gwangju, Busan, Gyeongju and Chuam, in time for sunrise. “Aura,” another three-day tour, stops at Mokpo, Gyeongju and Chuam.

All routes leave from Seoul Station. A package deal for a family room with a bunk bed and private shower, is 797,000 won ($579.41) per person. A suite room with a sofa and side table is 1.2 million won per person. Free drinks, fruit and snacks are available in the lounge. The trip also often includes a live music show.