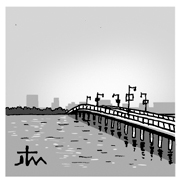 George Smoot, a professor of physics at the University of California, Berkeley, won the 2006 Nobel Prize in Physics for his studies on the origin and evolution of the universe. But it was his cousin Oliver Smoot who rose to fame first.

Young Oliver Smoot and his friends turned up on the Harvard Bridge connecting downtown Boston and Cambridge, one night in October 1958. Smoot repeatedly laid down on the bridge, let his companions mark his new position in paint, and then got up again.

The group of students from the Massachusetts Institute of Technology were not drunk, but measuring the length of the bridge using Smoot, whose height was 1.7 meters (5 feet 6 inches), then a fraternity pledge. Every 10 “smoots” was marked in paint, and the bridge’s length was measured to be “364.4 smoots plus one ear.”

Since their graduation, the marks have been refreshed each year by pledges in the incoming class. The lines have become an MIT cultural symbol. At the end of the 1980s, the bridge underwent various renovations, but the city of Boston preserved the smoot marks and changed the width of the bridge’s sidewalk using the smoot unit.

When in 2005 it was announced that Oliver Smoot had retired from the position of chairman of the American National Standards Institute, the Internet search behemoth Google adopted smoot as a unit of measurement and calculation.

MIT held a memorial ceremony to mark the 50th anniversary of smoot, inviting Oliver Smoot to attend the ceremony in October last year.

In this context, we can understand why Apple CEO Steve Jobs said in his commencement address at Stanford University in 2005, “Stay foolish.”

Jobs confessed that he had gained an invaluable lesson from his own choices made wholly according to his curiosity and intuition, remembering that he had quit school but would sit in on classes.

Reflecting on today’s circumstances, young people in our society seem to lack the spirit of adventure. Recently, the number of students preparing for vocational tests as those for entering public service is increasing, although they have entered university.

University campuses here have long been a battleground for gaining career advantages, thus the race for GPAs and Toeic scores. We hardly find a vital personality among young people who break away from the herd and set out on their own.

Experts say that people with da Vinci-type sensitivity and imagination will be in the limelight. However, the manner of cultivating human talent is moving in the opposite direction.

George Smoot will give a lecture at Ewha Womans University from the first semester this year, according to the university’s project that invites the world’s top scholars to the school. I wonder what he will say when he sees the landscapes of Korea’s universities.