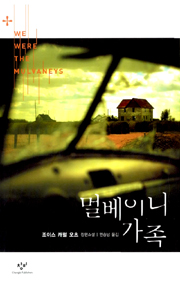 Joyce Carol Oates’ 1996 novel “We Were the Mulvaneys,” recently translated into Korean, is a parable for our times. The tragic collapse of this strong family unit underlines how fragile we are in the face of unexpected menace. No matter how hard we try to protect our loved ones, the rest of the world is always a threat.

The Mulvaneys are a typical American family in the 1970s, held as a model by the rest of the community in Mt. Ephraim, a rural village in the state of New York. But the almost-perfect environment in which they live is destroyed one night when the daughter, Marianne, is raped after a Valentine’s Day school dance by an older student.

Her father, distraught with anger, is incredulous that Marianne refuses to press charges against her rapist, and he sends her away to live with a distant relative.

The incident is quickly hushed up and no one in the family of the village is prepared to talk about it. Mrs. Mulvaney tries to comfort the rest of the family by saying that it is just like the whole family is suffering from a “fever” and that they’ll recover from the whole situation soon. However, their remaining children, all boys, sickened by what has happened, leave home to face their own troubled fates.

The Mulvaneys collectively consume a lot of alcohol, and no one fares well in this disturbing take on the American Dream. But there is hope when the family reunites at their former family home in Mt. Ephraim and tries to find a sense of closure.

“As with much of Oates’ work, the prose is sometimes prolix, but the very rush of narrative, in which flashbacks capture the same urgency of tone as the present, gives this moving tale its emotional power,” said Publishers Weekly.