Britney takes on Beyonce in the Korean pop charts

Britney takes on Beyonce in the Korean pop charts 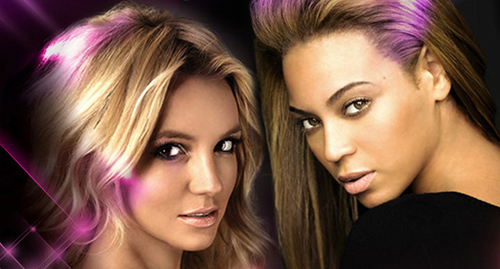 When pop divas Britney Spears and Beyonce released their latest albums in December and November respectively, Korean media and music critics focused on their similarities and how their alleged “rivalry” would fare in popularity votes, album sales and chart rankings.

Both stars are 28 years old. Spears debuted in 1999; Beyonce debuted in Destiny’s Child a year earlier. Today they are among the biggest names on the U.S. pop scene with achievements in music, film and business.

Their record label, Sony Music Entertainment Korea, said recently that after the publicity campaigns for their albums, Britney Spears won the hearts of more Korean fans than Beyonce by a slight margin.

According to Bae Yu-na at Sony, page views and online polls indicated that Koreans were more supportive of, or curious about, Spears. The race was neck-and-neck as Sony discovered that Beyonce’s “If I Were a Boy” was played 133 times on Korean radio shows from November to December, while Spears’ “Womanizer” was played 108 times.

In terms of album sales, Spears’ “Circus” sold 12,000 copies in Korea while Beyonce’s “I Am Sasha Fierce” sold 8,000 copies here. This is not representative of their global performance, in which Circus sold 2.8 million while I Am Sasha Fierce sold 3.2 million.

Pop critic Kang Il-kwon said that the songs in Spears’ album would appeal to various tastes of music mania in Korea with its hybrid pop and electronic sounds, although the presentation and choreography of Beyonce’s music videos are far more impressive than those of Spears.

According to Sony, Spears will embark on a U.K. tour in March. Beyonce , meanwhile, will be putting out her next singles, “Halo” and “Diva,” and her latest film, “Obsessed,” will premier soon.

Whoever you are loyal to, there’s no denying Britney and Beyonce are irreplaceable stars who will very likely keep doing it again.