Flames, festivities and a full moon

Flames, festivities and a full moon 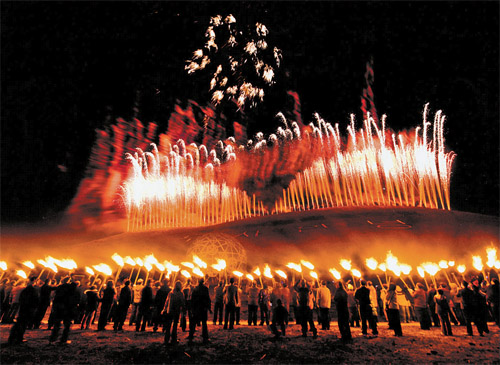 The burning of Saebyeol Oreum at the conclusion of the festival.

It’s a sight that has become a mainstay at this time of year on Jeju Island.

Thousands of locals and visitors congregate at the foot of an oreum, a volcanic parasitic cone. As eager onlookers brave the chilly weather, 50 or so “moon houses” (stacks of hay) are torched in a bold message of goodwill and luck.

With the flames engulfing the cone, fireworks and laser shows add to the splendor of the festival’s grand finale.

This is just one of the Jeju Island customs playing out over three days at the start of the lunar calendar. Entering its 13th year, the Jeju Jeongwol Daeboreum Fire Festival (Feb. 12 to 14) is a celebration of the jeongwol daeboreum or full moon festival, held on the 15th day of the first lunar month, with a Jeju Island flavor. 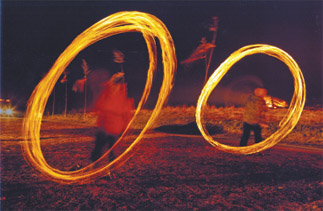 “The Jeju Jeongwol Daeboreum Fire Festival is a cultural festival which combines the traditional customs of praying for a bountiful harvest and general well-being with a mixture of modern elements,” said Kang Taek-sang, Jeju City mayor.

Traditionally, Koreans hold festivals to celebrate the first full moon of the lunar calendar in the belief that it signifies affluence and good luck. It’s also a chance for people to start the Lunar New Year afresh and free of any bad luck or spirits.

In particular, deulbul-noki, or controlled field and parasitic cone burning, is an integral part of the festival. During the winter season, parasitic cones and fields were traditionally torched to get rid of weeds and pests so that fresh grass would sprout in the spring.

While the festival took place at various parasitic cones in the past, Saebyeol Oreum, an area the equivalent of 80 football fields and taking up half the festival grounds, was chosen as the permanent locale for the festivities in 2000.

Before the burning, a torch relay is held. An improved multimedia art show will be added, say organizers. There are also plenty of folk games, kite flying and deungbul, a children’s game played with canteens filled with burning charcoal.

Visitors write their wishes on a piece of paper and place them under the moon houses to be sent to the heavens when the hay is set ablaze. Visitors can also participate in jubul-nori on the final day, a ritual of controlled burning of rice field paddies and river banks to rid the area of rats and mice.

“From our past experience, those who partake in the festival usually return. It’s perhaps the memorable sight of a blazing oreum and the unique experiences that the festival offers but most seem to leave the festival impressed,” said Han Jung-soo of the province’s Tourism Promotion Department.

In order to truly understand the traditions and customs displayed at the festival, one must delve hundreds of years back into the island’s history.

The practice of setting an entire parasitic cone on fire stems from the age-old tradition of controlled field burning. According to Han Jae-ho of the Jeju Special-Governing Province’s Tourism Promotion Department, there are 386 grass-covered parasitic cones on the island which were grazed by horses and cattle. They resulted from previous volcanic activity and are mainly composed of basaltic lava and tuffs.

“Up until about 30 years ago, each household on Jeju Island had an average of two to three cattle or horses. Neighbors would take turns taking a herd of livestock to a nearby oreum or field to graze,” said Heo Nan-choon, associate director of Jeju National University’s Tamla Culture Research Institute.

According to Heo, these parasitic cones were also used as burial sites. In more recent times, signal towers have been placed on parasitic cones near the shore. During the 1970s, the practice of burning came to a halt.

“As a part of the Saemaeul Movement, the government didn’t want to risk losing wildlife, plants and trees in wildfires stemming from field burning. Hence the practice was banned,” said Cho Myeong-chul, director of the Jeju Cultural Center.

Controlled parasitic cone and field burning became a thing of the past until 1997, when the provincial government decided to revive the traditional practice to attract tourists during the full moon festival period.

As was the case back then, precautions are taken as strong winds can cause the fire to spread. According to Han, approximately 100 firefighters will be on hand throughout the festival, with an equal number on standby.

Jeju’s customs are also directly connected to the importance the locals place on horses.

During the Mongol invasions (1231-1270) and Jeju Island’s subsequent 80-year vassalage under the Mongol Yuan Dynasty, the number of horses increased.

“The Mongols saw the plains of Jeju Island and began to develop horse ranches on the island starting in the mid-13th century. In later years, some of the finest breeds were groomed for the Joseon royal family,” said Heo.

Although most horses were initially groomed to be used by troops in battle, horses became an important part of the island’s agriculture.

“The island is volcanic and as such, when seeds were planted during the spring months, the fields had to be firmly stepped on or the seeds would not settle properly. Horses and cattle were essential to the people of Jeju Island for this reason as well,” said Heo.

Horses have been the focal point for another reason leading up to this year’s festival. The horse-fighting event, a traditional folk game on the island, was canceled due to strong opposition from animal rights activists who deem the event cruel.

“Although we struggled to have the event included in this year’s festival, it has been left off the schedule. Instead, we will have horseback riding, miniature coaches pulled by ponies and performances involving horses,” said Han.

With the festival growing from a mainly local one to a large-scale event with aspirations for going global, organizers consider the Fire Festival to be a success thus far.

This year, organizers have provided an opportunity for visitors to contribute their message of hope by placing booths in Seoul and on Jeju Island. Three messages will be selected and presented as part of the festival’s closing event. The festival will also feature a Jeju ta-ak (traditional percussion instruments) performance team.

Organizers are optimistic that they’ll have another successful festival, and point out that while winter is not normally the most popular season to visit Jeju Island, the fire event, full moon festivities and traditional folk games are well worth the short flight there.

Big dreams from a small island

The Jeju Special Self-Governing Province and its tourism organization are starting 2009 with hopes of attracting a large number of visitors through big international events.

The 3rd International Delphic Games 2009 will be held from Sep. 9 to 15. Jeju Island has also been chosen to host an “Asean +1” (Association of Southeast Asian Nations + Korea) conference in 2009.

The modern Delphic Games, which were first held in Moscow, Russia in 2000, have their origins in a cultural festival which took place every four years in Greece from 582 B.C. to 394 A.D.

Yoo Hong-joon, the chairman of the games committee, at a Dec. 24 press conference last year stated his confidence in Jeju Island, based on its success in hosting diverse and sizeable events in the past.

The Korea-Asean Summit 2009 will be held in June. The Korean government had been mulling over several locations including Seoul, Busan and Jeju Island. On Oct. 23, President Lee Myung-bak announced Jeju Island as the location for the conference, based on an evaluation of convention facilities, its potential and likely customer satisfaction.

The event is expected to draw over 3,000 government and business leaders. Kim Tae-hwan, the governor of the province, hopes the summit will improve perceptions of Jeju’s convention industry.

The provincial government and the Jeju Tourism Organization are hoping that the international events, along with lowered travel costs and improved customer service, will bring six million visitors to the island per year. Between January and November 2008, visitor numbered totaled 5.4 million.